Who were the apothecaries? 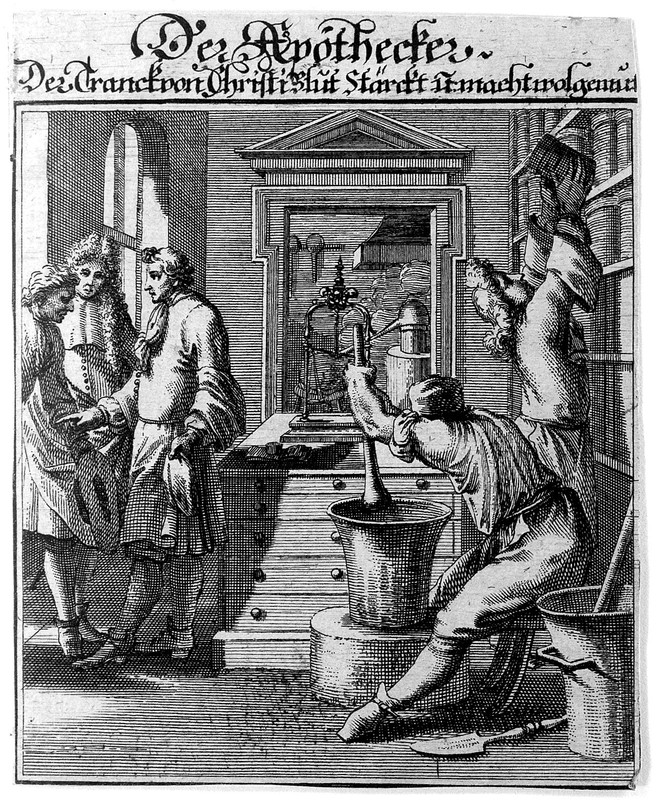 An apothecary is making up a prescription, whilst another takes a jar down from a shelf. Engraving by C. Luyken, 1695. Image courtesy of the Wellcome Collection (CC).

Who were the apothecaries and what role did they have in medicine?

Apothecaries were a branch of the tripartite medical system of apothecary-surgeon-physician which arose in Europe in the early-modern period. Well established as a profession by the seventeenth century, the apothecaries were chemists, mixing and selling their own medicines. They sold drugs from a fixed shopfront, catering to other medical practitioners, such as surgeons, but also to lay customers walking in from the street. Their daily tasks- as distinct from those of a barber-surgeon or physician whose primary duties during this era involved related diagnosis and treatment- were thus defined by a focus on retail (sales to the public without performing other clinical roles). Their shops were designed to attract the customer, and they stored their wares in elaborately decorated jars which looked beautiful in store. Skill in chemistry was an important part of the apothecary's identity, and these jars- which contained the ingredients used to manufacture medicines- leant prestige to their craft.

These practices were broadly comparable across Western and Northern Europe at this time, but in colonial North America medical treatment was patchier, and the distinction between different types of medical practitioners was looser. Missionaries or settlers who were pharmacists at home brought their craft with them, but they were relatively few and far between. Some colonies lacked apothecaries entirely, and physicians often dispensed their own drugs. Medicine was also often practiced by lay people, such as churchmen and governors, or housewives 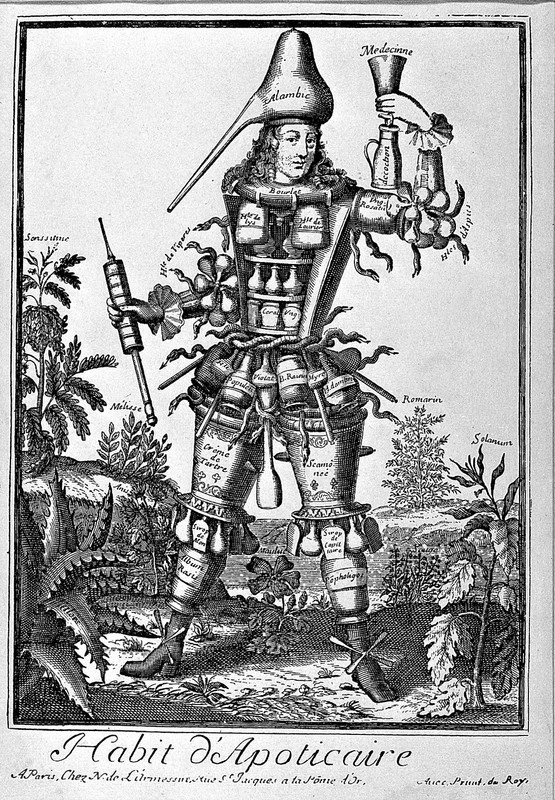 A figure made up of components of the apothecary trade. Engraving by N. de Larmessin II, 1695. Image courtesy of the Wellcome Collection (CC).

In England, on the other hand, apothecaries had become organised under a professional body by the early 1600s, hoping both to prevent other practitioners stepping into their jurisdiction, and to establish legitimacy of practice. The Worshipful Society of Apothecaries (founded in 1617) had begun to regulate training through apprenticeship. The Society of Apothecaries also established a chemical laboratory for the manufacture and sale of its own drugs to society members in 1672, in order to control the production of medicines and to boost its members’ reputation for the sale of reputable remedies. In addition, the Society inspected drugs sold in premises in London, in an attempt to monitor and prevent adulteration of pharmaceuticals within the city boundaries.

Despite this, by the eighteenth century the distinction between apothecaries and physicians in England had become blurred. From the end of the 1600s, English apothecaries had been increasingly practicing patient treatment alongside the sale of medicines, acting as general practitioners and advising, prescribing or otherwise treating where a doctor had not already done so (for example, as surgeon-apothecaries). By doing so, they were stepping on the turf of the physicians. This generated a controversy that ultimately led to major changes within the apothecary profession in Britain, and meant that medical practice there developed differently than other Western countries such as France and (ultimately) the USA.

Apothecaries from the Eighteenth Century Onward: England →
Who were the apothecaries?