Corpus Delicti: the Doctor as Detective 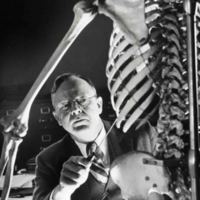 Although seemingly distinct disciplines, medicine and law—as medical jurisprudence, forensic medicine, or legal medicine—have been intertwined for centuries, and legal medicine itself encompasses a wide range of subjects, such as toxicology, psychiatry, chemistry, pathology, anatomy, autopsy, and suicide.

Corpus Delicti tells the story of Harvard Medical School's involvement with medical jurisprudence and the origins, rise, and, eventual fall of its Department of Legal Medicine–-in some ways a victim of its own success–-along with the individuals--George B. Magrath, Alan Richards Moritz, Richard Ford, and Frances Glessner Lee–-who shaped, developed, and promoted its work.

Corpus Delicti is an exhibit curated by Jack Eckert for the Center for the History of Medicine. The online exhibit was created in OnView in March 2016.