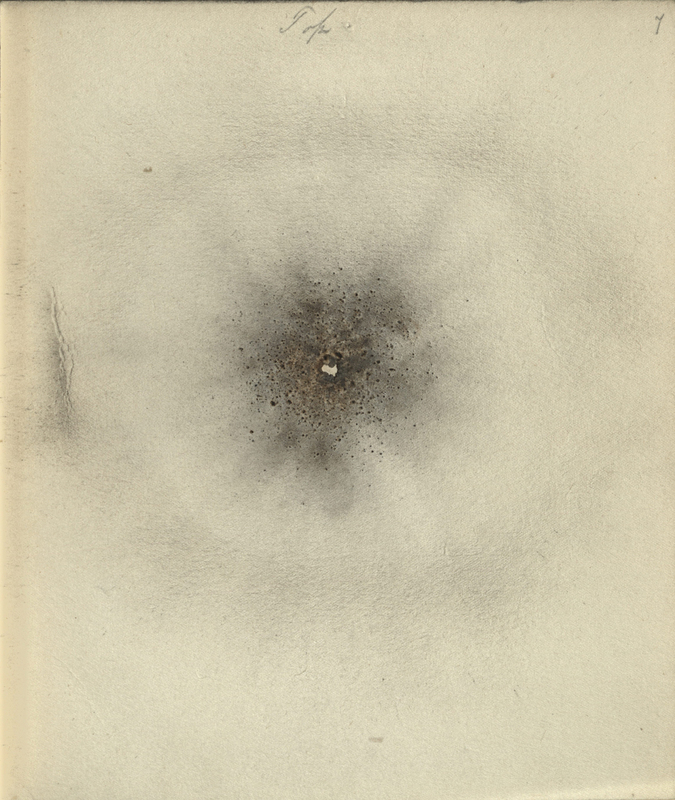 D.B.N. Fish, a physician and medical examiner at Amherst, compiled studies of gunshot residue; the item displayed shows a shot from a Smith and Wesson revolver at a distance of four inches.  Fish was attempting to determine whether any differences would be apparent between suicidal and homicidal wounds.

Fish presented his findings to the Massachusetts Medico-Legal Society at its meeting on February 6, 1884, as “The external appearance of pistol-shot wounds,” and described some of results of his experiments:

I hope to demonstrate … that in pistol and revolver shots these gases of explosion, instead of passing with the ball through the skin, expend the greater part of their force upon the tissues at a point outside of the opening made by the ball.  I can see that some particles of powder may cling to the ball and explode after passing through the skin.  For, in firing a Colt’s revolver at twenty-eight inches, several grains of powder passed, probably with the ball, through blotting paper, and sprinkled the ash, left after burning, around the hole made by the ball in a second sheet of paper which was placed four inches behind the first one.