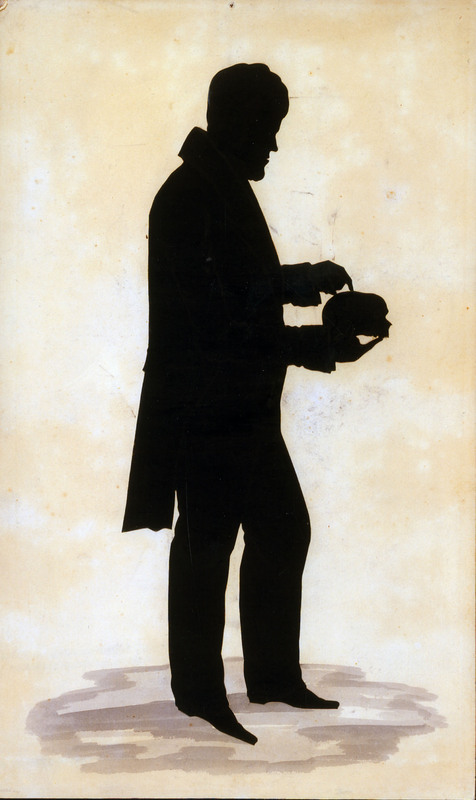 Silhouette of Johann Gaspar Spurzheim, circa 1832

This silhouette of noted phrenologist J. G. Spurzheim appears to have been produced during his final years on his tour through the United States. The object in his hand is, of course, a skull. 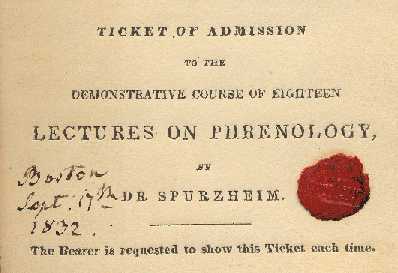 Ticket of Admission to the Demonstrative Course of Eighteen Lectures on Phrenology, September 17, 1832

This ticket is inserted at the flyleaf of a copy of the third American edition of J. G. Spurzheim's treatise, Phrenology, or the Doctrine of the Mental Phenomena (Boston: Marsh, Capen and Lyon, 1834) and was issued for his popular course of lectures at the Boston Athenaeum during the fall of 1832. The Boston Medical and Surgical Journal reported, "Among the constant attendants on this course are our most distinguished physicians, lawyers and divines … and although we cannot say how many of these are convinced of the correctness of Dr. Spurzheim’s peculiar science, most are persuaded that there is more truth in it than they had before suspected, and none can fail to be forcibly and favorably impressed with his ideas of education and of intellectual philosophy." A subsequent course of lectures in Cambridge was never completed due to Spurzheim’s death on November 11th.

Samuel Wells presented this ticket to the Boston Society of Natural History. The seal on the ticket reads "Res non verba quaero" [I seek deeds, not words.]