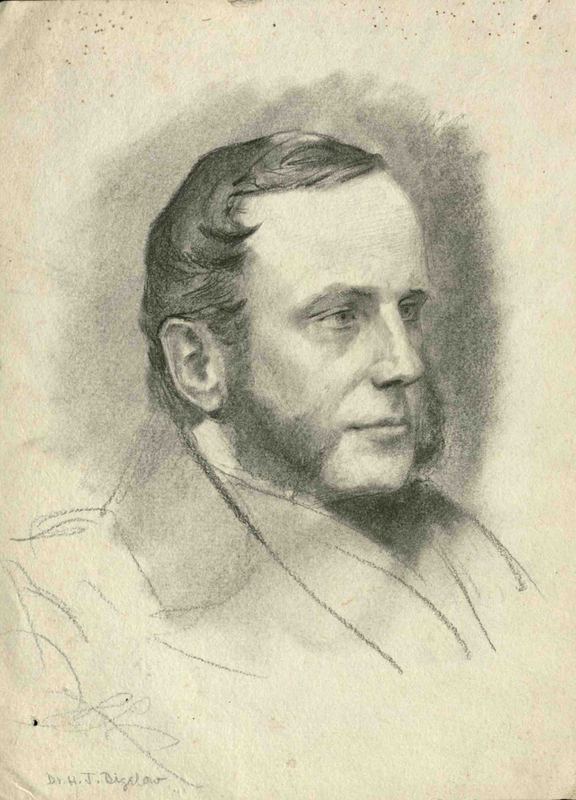 Gift of Robert C. Hinckley to the Library of Harvard Medical School, 1934

Some fifty years after working on the First Operation under Ether, artist Robert C. Hinckley presented Harvard with ten studies of heads of physicians which were used as part of his research for the painting.  The studies include pencil sketches of George Hayward, Augustus Addison Gould, Solomon David Townsend, and, here, Henry Jacob Bigelow.

Word of the etherization discovery spread rapidly, principally due to the efforts of surgeon Henry Jacob Bigelow (1818-1890).  He presented the first formal account of the employment of anesthesia to the American Academy of Arts and Sciences on November 3 and made a similar presentation to the Boston Society for Medical Improvement on November 9.  Bigelow’s landmark article, “Insensibility during Surgical Operations Produced by Inhalation,” reproducing his second presentation, was then published in the Boston Medical and Surgical Journal on November 18 and reprinted in the Boston Daily Advertiser the next day.

Henry Jacob Bigelow became one of the most fervent supporters promoting the use of ether anesthesia and was consequently selected to deliver the address at the dedication of the ether monument in the Boston Public Garden in 1868.  At Bigelow’s death, Oliver Wendell Holmes wrote

No person took hold of Dr. Morton’s discovery with such far-seeing, almost prophetic appreciation, as the young surgeon who had been but a few years in practice, and who threw all the energy of his early manhood into his advocacy of the new and startling innovation which was destined to change the whole aspect of surgery.  It was not merely by his sagacious foresight that he recognized the importance of this epoch-making novelty, but throughout its subsequent history he was the foremost champion of artificial anaesthesia.