He applied for internship at Massachusetts General Hospital, the Boston City Hospital, and the Peter Bent Brigham Hospital and was turned down from each hospital. He accepted a position at the segregated Freedman’s Hospital in Washington, D.C.

At the end of his internship, in 1916, Wright look the licensing exam in Maryland, Georgia, and New York, achieving high scores in each state. He returned to Atlanta to practice with his step-father, and was then commissioned as a First Lieutenant in the US Army Medical Corps.

In 1919, he settled in New York City where he opened a general practice of surgery in Harlem, and was appointed Assistant Physician in the Health Department Venereal Disease Clinic. He also accepted a position as Clinical Assistant Visiting Surgeon at Harlem Hospital. Throughout his career, Wright fought to integrate and improve Harlem Hospital and was eventually made Surgical Director of Harlem Hospital.

In 1934, Wright took over chairmanship of the NAACP’s Board of Directors, which he occupied until his death in 1952.

Dr. Wright's papers are available at the Center for the History of Medicine.

The Harvard Medical Library does not hold copyright on all materials in this collection. For use information, consult Public Services at chm@hms.harvard.edu 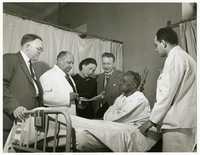 Perspectives of Change: The Story of Civil Rights, Diversity, Inclusion, and Access to Education at HMS and HSDM