John Collins Warren was born in Boston on May 4, 1842 to Jonathan Mason Warren and Anne Crowninshield Warren. He was educated at Boston Latin School, and then at another Boston private school. He graduated from Harvard College in 1863, and from Harvard Medical School in 1863. After a course at Jefferson Medical College, Philadelphia, Pennsylvania, he studied in Europe for three years. He spent most of his time in London, Edinburgh, Paris, Berlin, and Vienna. He began at Massachusetts General Hospital as outpatient surgeon. During his thirty-six years there, he was progressively promoted until he reached the position of senior visiting surgeon before retiring in 1905. In 1871, he began as an Instructor in Surgery at Harvard Medical School. He became the Professor of Surgery, a position endowed as the Moseley professorship in 1899, until he retired with the title of professor emeritus in 1907. With Dr. Henry Pickering Bowditch (1840-1911), Warren worked to coordinate the ideas, plans, and funding for a medical center in Boston, so that the Harvard Medical School would be surrounded by hospitals. Warren was particularly important in involving the Collis P. Huntington Memorial Hospital, an important institution in cancer research. Warren was a member of the American Surgical Association (and at one time president), the American Medical Association, the Massachusetts Medical Society, and the College of Physicians of Philadelphia. He received an honorary fellowship from the American College of Surgeons, and an honorary membership to Phi Beta Kappa. He was chairman of the Harvard Cancer Commission for nearly 25 years, and president of the Massachusetts Eye and Ear Infirmary. He received many honorary degrees and fellowships, including Honorary LL.D. degrees from Jefferson Medical College (1895), Harvard, and McGill, and honorary degrees of fellowship from the Royal College of Surgeons of England (1900) and the Royal College of Edinburgh. From 1908 to 1914 he was an Overseer at Harvard University. Warren is part of a family of Boston doctors that is well-known in early Boston medical history. Warren's great-grandfather, John Warren (1753-1815), a surgeon in the American Revolution, was the first professor of anatomy and surgery at Harvard and helped found Harvard Medical School; his grandfather, John Collins Warren (1778-1856), was a dean and professor of anatomy and surgery at Harvard and helped found Massachusetts General Hospital; his father, Jonathan Mason Warren (1811-1867), was a prominent surgeon at Massachusetts General Hospital. Warren’s personal interests included involvement in the Massachusetts Historical Society (to which he left family papers from the Revolutionary War), the Bunker Hill Monument Association, the Humane Society of Massachusetts, the American Academy of Arts and Sciences. Warren died on November 3, 1927.

William Jurian Kaula was born in 1871 in Boston, Massachusetts. He attended the Mass Normal Art School, which included an apprenticeship at Cowles Art School. He attended the Académie Julian in Paris from 1891-1896. He then returned to Boston to study under the famed landscape artist Edmund Tarbell at the School of the Museum of Fine Arts. Like his mentor, New England landscapes were the focus of Kaula's body of work. Tarbell had a profound effect on Kaula's style, and Kaula is frequently referred to as a "Tarbellite". Kaula exhibited his work extensively. He exhibited paintings at the Paris Salon, the National Gallery, the Corcoran Gallery of Art, and the Boston Art Club. He won a medal at the Pan-Pacific Exhibition in 1915. He also collaborated with John Collins Warren to create a set of anatomical watercolors for teaching aids in 1894. Kaula died in 1953.

The watercolor paintings in this collection were commissioned by and made in collaboration with John Collins Warren to assist him in teaching. The majority of these paintings were done by the artist William J. Kaula, who was primarily a landscape artist, in 1894. There are also a few paintings by Henry Parker Quincy in this collection. The paintings represent a wide range of pathologies and surgical procedures.

These watercolors were used by John Collins Warren for teaching. They were left in the Harvard Medical School Department of Anatomy after Warren's death in 1927. The Department donated the watercolors to the Warren Anatomical Museum on 05/02/1929.

Teaching watercolor of bone and tissue 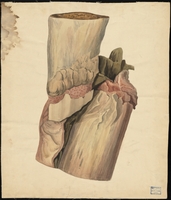 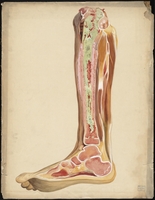 Teaching watercolor of the development of the peritoneum

Teaching watercolor of the development of the peritoneum

Teaching watercolor of a cross section of the abdomen 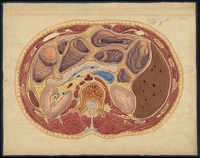