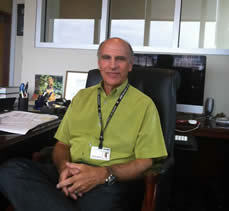 Dennis Kasper, from the Harvard Ph.D. Progam in Biological and Biomedical Sciences 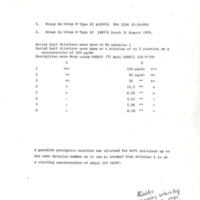 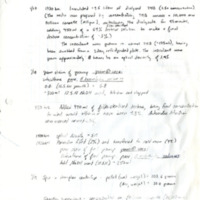 Research experiments processes and notes relating to the development of a group B streptococcus Type III vaccine, 1982-1984 January. 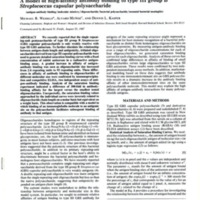 “A model of high-affinity antibody binding to type III group B Streptococcus capsular polysaccharide,” an article written by Kasper along with colleagues Michael R. Wessels and Alvaro Munoz, based on their research at the Channing Laboratory, Brigham & Women’s Hospital; Division of Infectious Diseases, Beth Israel Hospital; and Harvard Medical School, 1987 December. 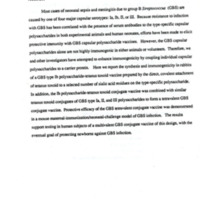 Abstract from the draft of a scientific research paper entitled “Neonatal Mouse Protection Against Infection with a Multiple Group B Streptococcal Serotypes by Maternal Immunization with a Tetravalent GBS Polysaccharide-Tetanus Toxoid Conjugate Vaccine” by Kasper and colleagues Lawrence C. Paoletti, Michael R. Wessels, Ariane Rodewald, Amy A. Shroff, and Harold J. Jennings, based on research focused on the development of a group B Streptococcus tetravalent conjugate vaccine, 1994 January 07. 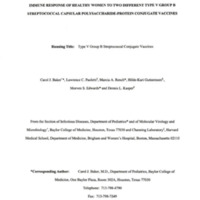 Title page of a draft of the paper “Immune Response of Healthy Women to Two Different Type V Group B Streptococcal Capsular Polysaccharide-Protein Conjugate Vaccines,” based on Kasper’s continuing research related to the development of a conjugate vaccine against group B streptococcus, with Carol J. Baker, Lawrence C. Paoletti, Marcia A. Rench, Hilde-Kari Guttormsen, and Morven S. Edwards, 2003 July 03.

Excerpt from a draft of the paper “Immune Response of Healthy Women to Two Different Type V Group B Streptococcal Capsular Polysaccharide-Protein Conjugate Vaccines,” based on Kasper’s continuing research related to the development of a conjugate vaccine against group B streptococcus, with Carol J. Baker, Lawrence C. Paoletti, Marcia A. Rench, Hilde-Kari Guttormsen, and Morven S. Edwards, 2003 July 03.

Dennis L. Kasper (1943-) is the William Ellery Channing Professor of Medicine at Harvard Medical and a Professor of Microbiology and Immunology at Harvard Medical School, Boston, Massachusetts. Kasper is known for his research in chemistry, immunochemistry, and the genetics of bacteria and their role in virulence. This research has focused on topics related to the biology of bacterial polysaccharides including immunology, virulence, structure, and use as vaccines and immunomodulators.

Dennis L. Kasper was born on February 23, 1943 in Chicago, Illinois. He received his college degree from the University of Illinois, Urbana, in 1963, majoring in Zoology. Kasper completed his medical degree from the University of Illinois College of Medicine, Chicago, 1967, and later received an honorary Master’s of Arts from Harvard University, Cambridge, Massachusetts in 1986.While at the College of Medicine, Kasper acted as a United States Public Health Service Student Research Fellow in the Department of Physiology.  After graduation, Kasper served as a Research Medical Officer at the Walter Reed Army Institute of Research (1969-1972). He began his time at Harvard Medical School, Boston, Massachusetts, in 1973, as an Albee Fellow (1973-1985) and Instructor (1973-1974).  In 1975, Kasper was hired as an Assistant Physician, Department of Medicine at Beth Israel Hospital in Boston, and as an Assistant Professor at Harvard Medical School. He became an Associate in Medicine, Peter Brent Brigham Division of Brigham and Women’s Hospital in 1977. Kasper acted as an Associate Professor of Medicine, Harvard Medical School from 1979-1985, at which point he was promoted to Professor of Medicine, Harvard Medical School. During this time, he became a Physician and the Director, Division of Infections, Beth Israel Hospital in 1981.

Kasper acted as the Associate Director the Channing Laboratory at Brigham and Women’s Hospital from 1982-1988, when he became the Co-Director, and then the Director (1996-2012). His academic career included a post as the Edward Kass Professor of Medicine (1988) and then as the William Ellery Channing Professor of Medicine and Professor of Microbiology and Immunology, Harvard Medical School, positions Kasper has held since 1989. He additionally acted as the Executive Vice Chairman, Department of Medicine, Brigham and Women’s Hospital and as the Executive Dean for Academic Programs at Harvard Medical School (1997-2003). He was the Scientific Director at the New England Center of Excellence in Biodefense and Emerging Infectious Diseases, Harvard Medical School (2003-2014).

Much of Kasper’s research has been related to the interactions of microbes, both commensals and pathogens, with the immune systems. His laboratory research has focused on bacterial carbohydrates. In studies integrating structural carbohydrate chemistry, microbiology, immunology, biochemistry, and genetics, Kasper and his laboratory staff have studied the carbohydrates of group B streptococcus, the foremost cause of serious neonatal bacterial infections, and Bacteroides fragilis, an important intestinal commensal. His research also encompasses the interactions of the microbiota with the mucosal and systemic immune systems.  His laboratory work on commensals has led to identification of other aspects of the microbiome‘s interactions with the immune system. Another area of Kasper’s work deals with Francisella tularensis, which is considered a potential agent of bioterrorism.