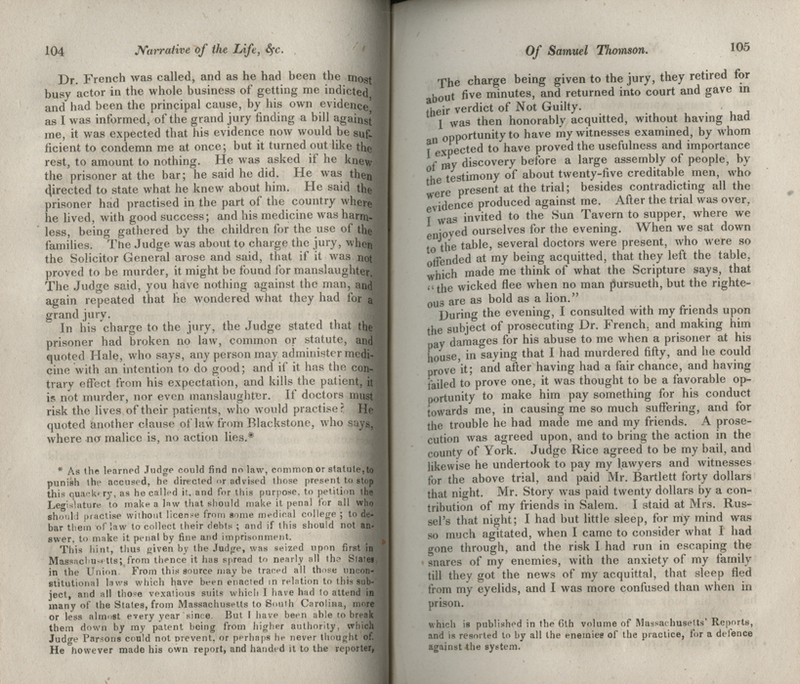 First published in 1822, Thomson's New guide to health (later known as The Thomsonian materia medica) was the cornerstone of the Thomsonian botanical medical movement and went through thirteen editions by 1841. Many editions were prefaced, as here, by Samuel Thomson's lengthy biographical narrative. The passage displayed concerns Thomson's 1809 trial for murder and acquittal following the administration of lobelia. 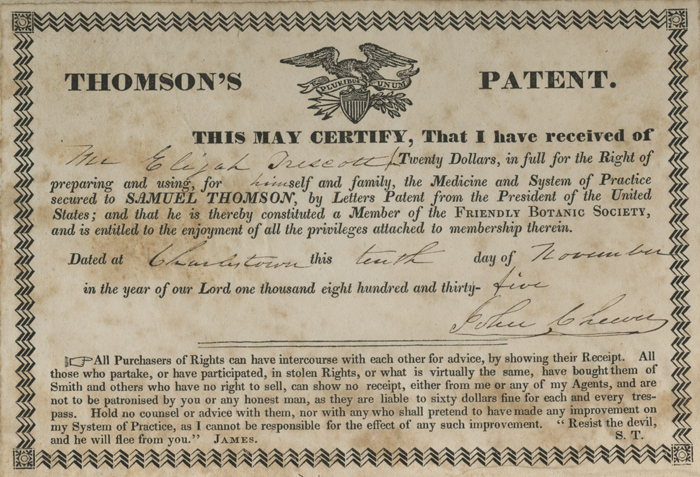 Many copies of the New guide to health and the Thomsonian materia medica contain, as does this one, certificates attesting to the holder's right to use Thomsonian preparations as a member of the Friendly Botanic Society. By 1840, Samuel Thomson had sold over 100,000 patents for his botanic system. 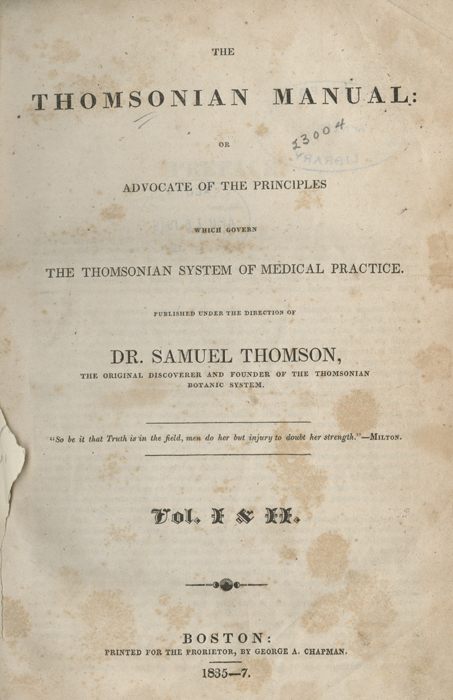 The Thomsonian botanical movement, like homeopathic medicine, developed its own culture of authorized druggists and agents and published books and a number of short-lived periodicals, including this one from Boston. 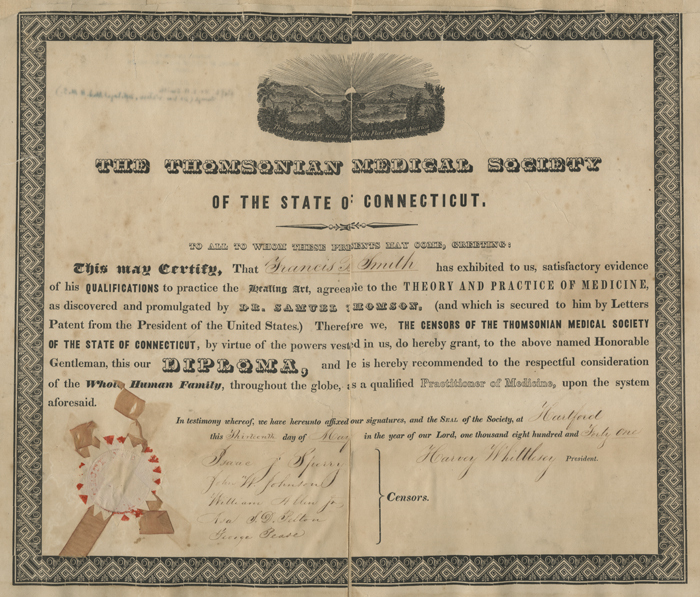 As Samuel Thomson opposed the formation of Thomsonian medical schools, local societies—such as this one in Hartford, Connecticut—assumed the authority to grant diplomas to certified botanical practitioners. 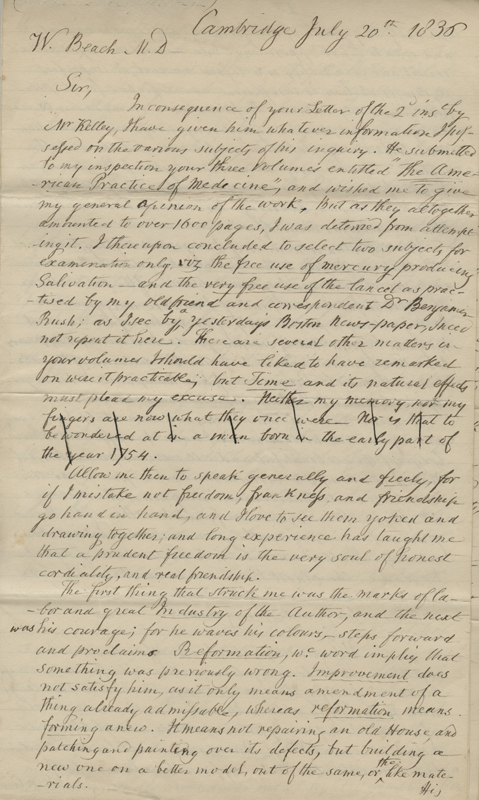 One of the most notable supporters of Samuel Thomson was Benjamin Waterhouse, formerly Harvard's Hersey Professor of the Theory and Practice of Physic. Here, in a letter to Wooster Beach (1794-1868), founder of the eclectic medical movement, Waterhouse states he has "seen so many unequivocal instances of substantial benefit in chronic disorders from the use of the lobelia emetic and the subsequent cleansing of the whole tract of the intestines, and the elimination of the secretory glands, and various vessels between the bowels and the skin by means of the steam, or vapour bath, that I must be blind, or will fully shut my eyes to conviction not to acknowledge its salutiferous efficacy." 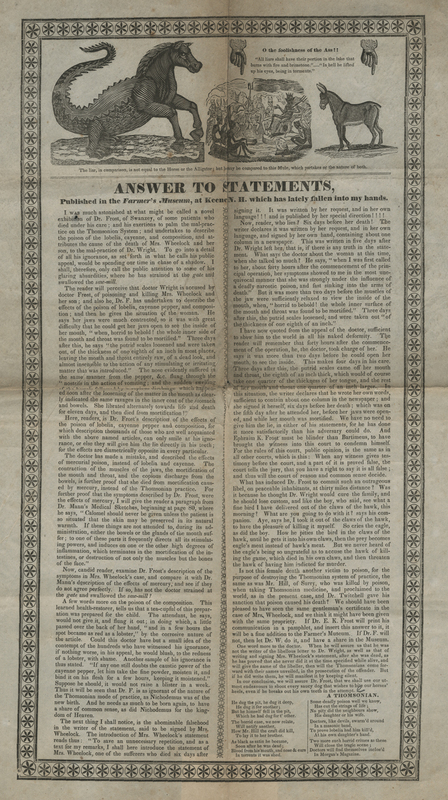 Answer to statements published in the Farmer's Museum, at Keene, N.H. which has lately fallen into my hands, 1830

Samuel Thomson and his system of medicine had critics, as well as supporters. This New Hampshire broadside ridicules the attempt by Ephraim K. Frost to blame the death of a patient on the Thomsonian system. 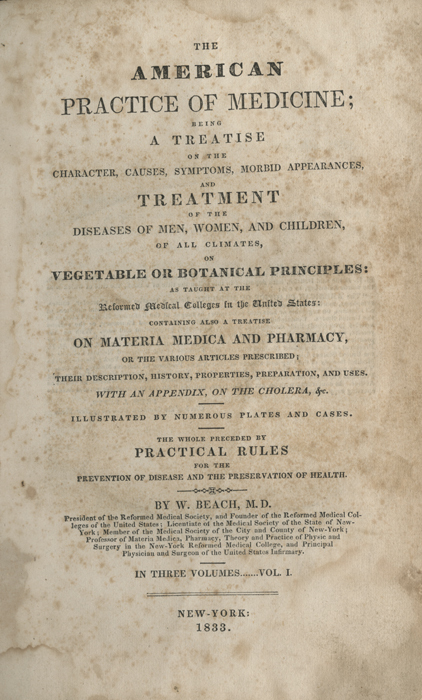 The American practice of medicine, 1833

In reaction to the harsh practices of regular physicians and also the sweating and purging regimens of Thomsonianism, Wooster Beach developed his own botanical medical system which evolved into medical eclecticism, one of the most popular sectarian movements of the 19th century. The three volume American practice of medicine was later abridged into a single volume, The family physician, and both titles passed through numerous editions. 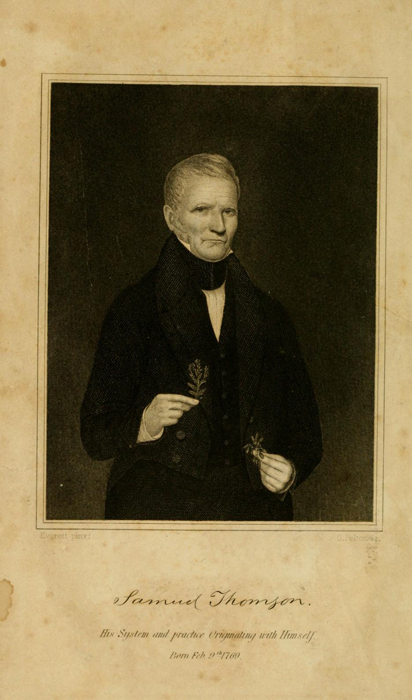