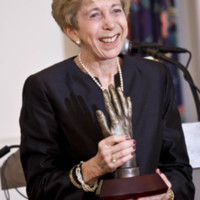 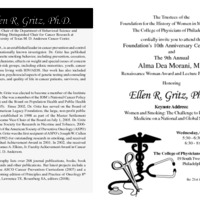 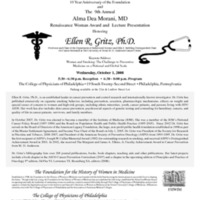 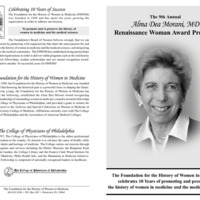 Dr. Ellen Gritz is the Professor and Chair of the Department of Behavioral Science and Olla S. Stribling Distinguished Chair for Cancer Research at The University of Texas M. D. Anderson Cancer Center.

Dr. Gritz is an established leader in cancer prevention and control research and internationally known investigator. Dr. Gritz has published extensively on cigarette smoking behavior, including prevention, cessation, pharmacologic mechanisms, effects on weight and special issues of concern to women and high-risk groups, including ethnic minorities, youth, cancer patients, and persons living with HIV/AIDS. Her work has also included skin cancer prevention, psychosocial aspects of genetic testing and counseling for hereditary cancers, and quality of life in cancer patients, survivors, and family members.

In October 2007, Dr. Gritz was elected to become a member of the Institute of Medicine (IOM). She was a member of the IOM's National Cancer Policy Board (1997-1999) and the Board on Population Health and Public Health Practice (1995-2005). Since 2002 Dr. Gritz has served on the Board of Directors of the American Legacy Foundation, the large, non-profit public health foundation established in 1998 as part of the Master Settlement Agreement, and became Vice-Chair of the Board on July 1, 2005. Dr. Gritz was President of the Society for Research in Nicotine and Tobacco, 2006-2007, and President of the American Society of Preventive Oncology (ASPO) from 1993-1995. Dr. Gritz was the first recipient of ASPO's Joseph W. Cullen Memorial Award (1992) for outstanding research in smoking, and received ASPO's Distinguished Achievement Award in 2001. In 2002, she received The Margaret and James A. Elkins, Jr. Faculty Achievement Award in Cancer Prevention from M. D. Anderson.

Dr. Gritz's bibliography lists over 268 journal publications, books, book chapters, teaching aids and other publications. Her latest projects include a book chapter in the ASCO Cancer Prevention Curriculum (2007) and a chapter in the upcoming edition of Principles and Practice of Oncology 8th edition, DeVita VI, Lawrence TS, Rosenberg SA, editors (2008).

Biography from the Foundation for the History of Women in Medicine website, here.