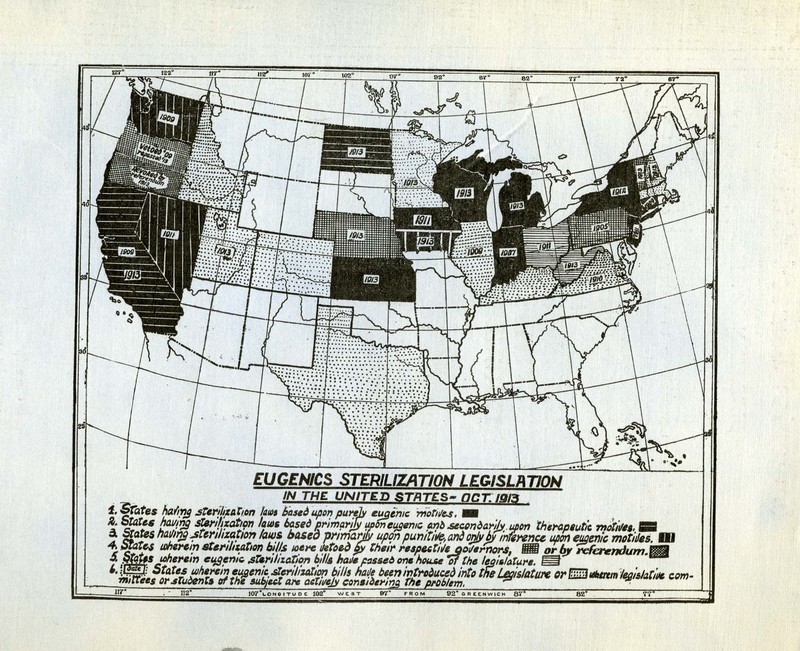 One of the American eugenics movement’s areas of greatest influence was fostering legislation for restrictions on marriage and compulsory sexual sterilization as a key to limiting the propagation of the unfit and undesirable. In 1896, Connecticut became the first state to formally legislate against the marriage of epileptics, imbeciles, and the feeble-minded. The first years of the 20th century saw similar legislation enacted in Kansas, New Jersey, Ohio, Michigan, and Indiana.

Harry Hamilton Laughlin (1880-1943), the assistant director of the Eugenics Record Office, was one of the foremost proponents of enforced sterilization in the eugenics movement. Under the auspices of the Office, Laughlin, as part of the Committee to Study and to Report on the Best Practical Means of Cutting Off the Defective Germ-Plasm in the American Population, issued a report on legalization of sterilization in 1914; this outlined the sterilization laws in every state and provided a model law for implementation. Indiana was, in 1907, the first state to enact a sterilization law, and before America’s entry into World War I, similar laws were in place in Connecticut, Washington, California, New Jersey, Iowa, and ten other states. Medicine, and specifically surgery, began to join with the eugenics movement at this period when sterilization through vasectomy (cutting of the vas deferens in the male) or salpingectomy (removal of the Fallopian tubes in the female) could be instituted without loss of sexual enjoyment. Sterilization laws continued to be enacted and, by 1931, thirty states had passed some version of one. By the end of 1931, over 12,000 sterilizations of individuals considered to be insane or feeble-minded had been performed, over half of these in California. The development was not confined to the United States; some Canadian provinces adopted sterilization laws. Denmark was the first European country to do so, and Finland, Sweden, Norway, Iceland, and Germany followed.