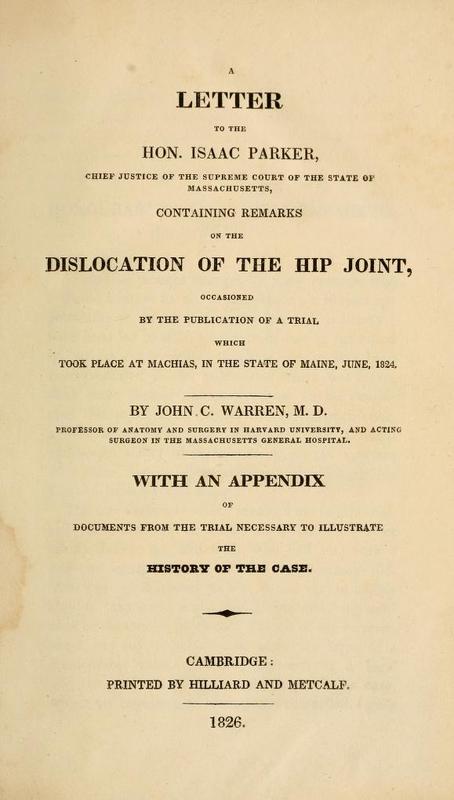 After realizing that his hip would never be right again, Charles Lowell decided to sue his local physicians (disregarding multiple doctors’ pleas to reconsider). He accused Hawkes of neglect and failing to initially reduce the dislocation, while he brought Faxon up on charges for having tried to manipulate the dislocation without the necessary medical training. Prior to 1987, defendants were not permitted to testify on their own behalf, and if Faxon had not been likewise accused, Hawkes could have easily put him on the stand to protect him as he was the only other medical practitioner present at the time of the incident (Harvey 1991, 175). The court case Lowell vs. Faxon and Hawkes was brought to trial on three occasions, and no concrete verdict was ever returned. The first trial, held in June of 1822 at the Superior Court for Washington County, Maine under Justice David Perham ruled in Lowell’s favor. The Judge charged Faxon and Hawkes $1962, who promptly appealed the case and brought it to the Supreme Court at Machias. The second trial, overseen by Chief Justice Prentiss Mellen, took place three months later in September of 1822. The jury, however, was highly influenced by outside politics not directly associated with case itself, and was unable to come to any agreement. They were divided, not only by the loyalties and biases between Massachusetts and Maine (the later had only seceded in 1820), but also on a more micro scale between Washington County in northern Maine and the surrounding areas (Spaulding 1910, 9). The doctors in this trial can be clearly grouped into opposing sides: all Bostonian doctors in favor of the plaintiff; all doctors from Maine supporting the defense. Amongst the smaller sphere of Maine residents, players can likewise be separated: Hawkes from Eastport (to whom whose residents felt a great sense of loyalty), and Lowell from outside the County lines. Consequently, the case was brought to court a final time in June of 1824. Once again, however, it came to a stale mate, and Justice Nathan Weston decided that “the best thing for all parties was for the plaintiff to accept a non-suit and the defendant to take no costs” (Spaulding 1910, 23). Nobody wins.

Bulletin of the AAM_Spaulding 1910.pdf

Commentaries and summaries of the trial written in its contemporary can be found either in Warren’s “A Letter to the Hon. Isaac Parker,” or in one of Lowell’s publications: “An Authentic Report of a Trial before the Supreme Judicial Court of Maine for the County of Washington, June term 1824,” and “Report of the trial of an Action.” James Spaulding brings the case back to light in 1910 with his publication of “Lowell vs. Faxon and Hawkes: A Celebrated Malpractice Suit in Maine.” 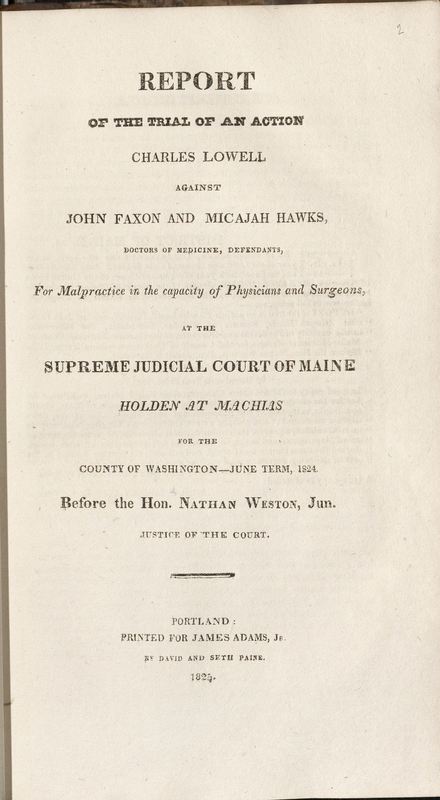 ← Discussion and Debate
The Courtroom →
The Trial