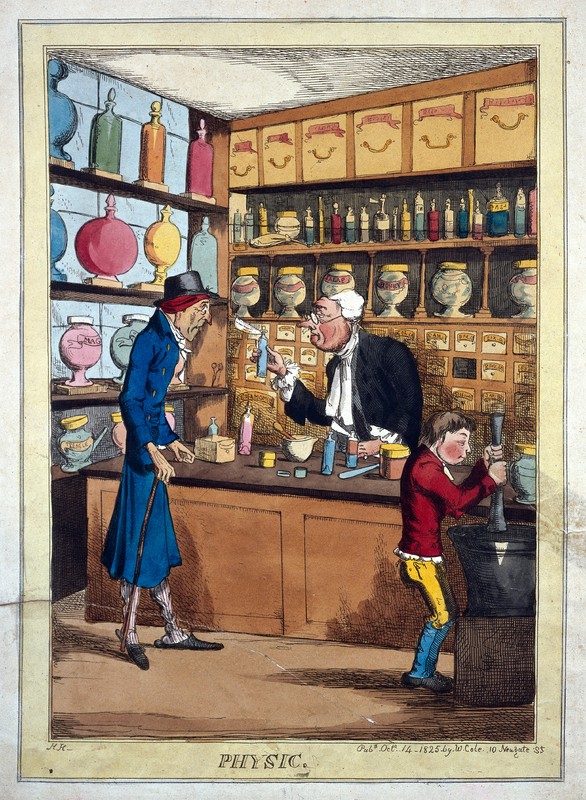 The interior of an apothecary's shop, with an apprentice working the mortar and pestle. Coloured etching by H. Heath, 1825. Image courtesy of the Wellcome Collection (CC).

In what would become the USA, medical practice was much less regulated than in Europe. By the 1700s, medical men were becoming more numerous in North American towns, but the boundaries between the different groups of practitioners remained blurred. Physicians tended to dispense their own drugs, and often had a shop for the purpose attached to their office. Medicines were also sold by wholesale druggists and merchants (regular shopkeepers). Apothecaries existed (as a profession defined by the possession of a shop purely devoted to the sale of drugs), but they also practiced patient care like a physician might, and sold toiletries like a shopkeeper. There was little to no regulation in practice, and there was no expectation or requirement that the drugseller be educated. Unlike in Britain and France, the medical practitioner was free to practice which parts of the profession he chose, and to call himself what he liked. This was in part due to the developing nature of North American society at this time, but also due to the individualistic attitudes within this society, which meant that standardisation was resisted as unnecessary.

This lack of regulation continued into the nineteenth century, despite an expansion of interest in pharmacy fuelled by exploration into native herbs and plants after the end of the Revolutionary War. Irregular medical and pharmaceutical practitioners flourished, such as the Thomsonians, eclectics, Reformed Practitioners, and homeopaths. The dispensing of medicines within regular practice remained largely the preserve of physician-apothecaries, who tended to both prescribe and dispense. This confusion encouraged the rise of the wholesale druggist as the group responsible for the manufacturing, mixing, and sale of drugs to the medical profession and, sometimes, the public. They were in general not medically trained, and their businesses were commercial enterprises. 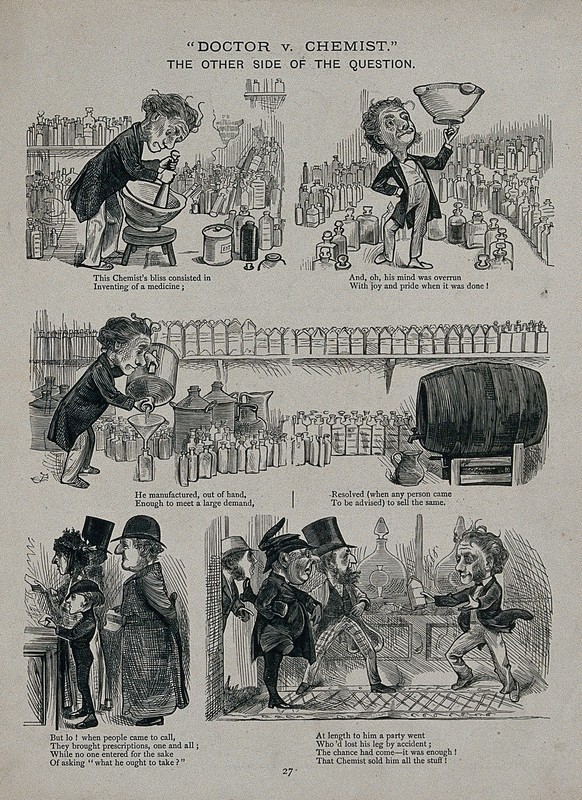 A cartoon illustrating the competition between physicians and apothecaries. Etching by an unknown artist, c. 1880. Image courtesy of the Wellcome Collection (CC).

This group and their activities were therefore similar in nature to the English chemist-druggist, and as the century progressed they increasingly sold directly to the public from a shopfront. The responsibility for creating effective drugs, and the profit motive in doing so successfully, promoted pharmaceutical expertise within the trade and made the druggist's shop the forerunner of the modern American drugstore as well as the pharmaceutical industry.

Despite this, professionalisation of the druggist trade in any form did not begin until the mid-1800s, when local or state pharmaceutical societies and schools, alongside national bodies, were formed. In general, these organisations reflected the business orientations of the community and educational reform was resisted. Legal regulation at a national level did not occur until later in the century, and did not become comprehensive until after 1870. In addition, around this time the manufacture of drugs moved away from the counter and backroom laboratory to larger companies, changing the shape of the druggists’ occupation. The nature of mid-nineteenth century American pharmacy was therefore not defined by legal and professional regulation in the same way as it was in France and England, instead developing as a result of the free-market economics and laissez-faire politics of the new United States.