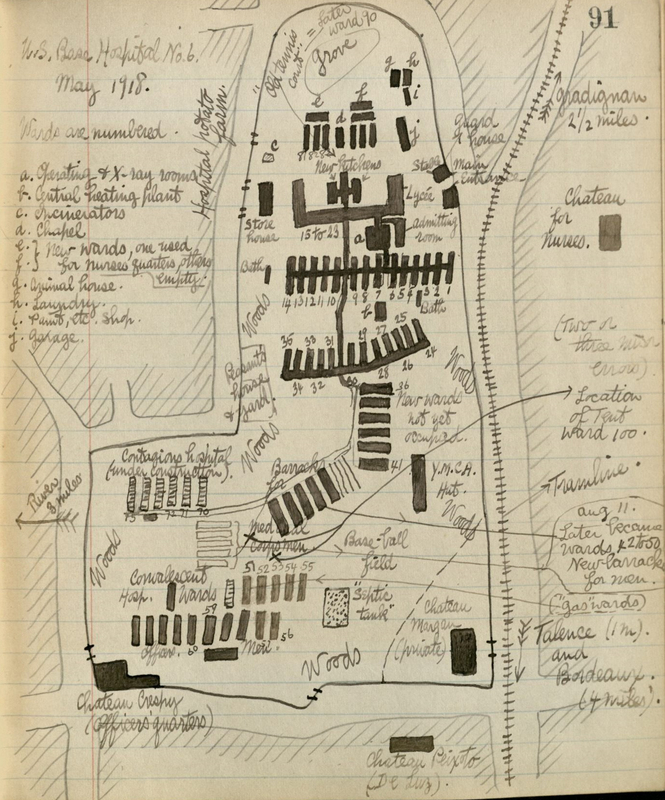 Bequest of Dr. White to the Library of Harvard Medical School, 1973

The Massachusetts General unit forming Base Hospital No. 6 left Boston on July 9, 1917, sailing on the Aurania.  The original unit had 28 officers, 64 nurses, and 153 medical personnel.

It arrived at Talence and assumed responsibility for L'Hopital Complementaire No. 25 there.  The first American patient was admitted on August 21.  The original capacity of the facility was 500 beds; by the end of the war, that number had grown to over 4000.  The personnel of No. 6 treated many cases of infectious disease, such as measles, mumps, meningitis, and scarlet fever, and August 1918 saw the appearance of the first cases of influenza.  In contrast to the experience of Base Hospital No. 5, No. 6 had an initial six month period of relative calm and organization, then ran at capacity to July 1918; the last months of the war saw the hospital at its busiest, with casualties from the Meuse-Argonne offensive coupled with a growing number of Spanish flu patients.

← Roger I. Lee in Command
Paul Dudley White's Exercise Tests →
Base Hospitals of the American and British Expeditionary Forces
Base Hospital No. 6