A Sale of Slaves 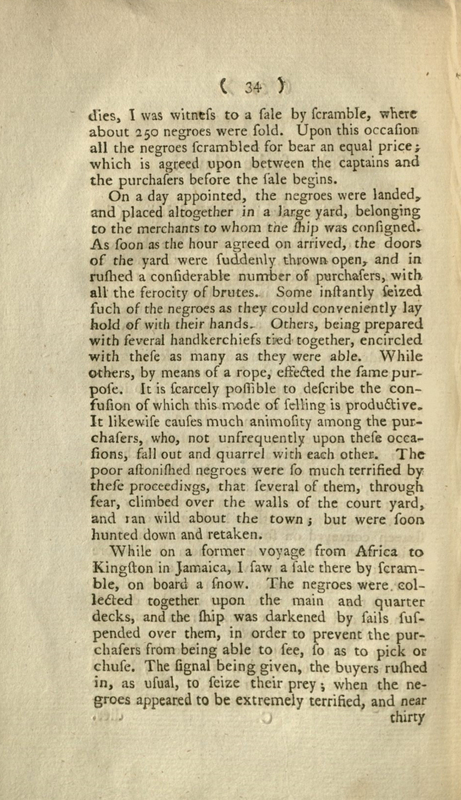 Purchased for the Boston Medical Library through the Historical Fund, 1949

In this 1788 pamphlet describing the English slave trade, British surgeon Alexander Falconbridge (d. 1792), who had made several voyages to Africa, describes the harsh treatment of slaves:

As soon as the wretched Africans, purchased at the fairs, fall into the hands of the black traders, they experience an earnest of those dreadful sufferings which they are doomed in future to undergo.  And there is not the least room to doubt, but that even before they can reach the fairs, great numbers perish from cruel usage, want of food, travelling through inhospitable deserts &c. They are brought from the places where they are purchased... in canoes; at the bottom of which they lie, having their hands tied with a kind of willow twigs, and a strict watch is kept over them.... Their allowance of food is so scanty, that it is barely sufficient to support nature.  They are, besides, much exposed to the violent rains which frequently fall ehre, being covered only with mats that afford but a slight defence; and as there is usually water at the bottom of the canoes, from their leaking, they are scarcely ever dry.

The passage displayed describes sales of slaves in the West Indies and Jamaica.