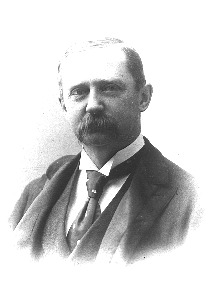 Born on May 4, 1842, the fourth member of the Warren dynasty, John Collins-or "Coll"-Warren was also Harvard-educated, graduating from the College in 1863 and the Medical School in 1866. After completing his studies in Europe, he returned to Harvard Medical School, joining the faculty as an instructor in surgery in 1871. He became a full professor of surgery in 1893, then the first Moseley Professor of Surgery from 1899 until he was granted emeritus status in 1907. J. Collins Warren was a member of the staff of the Massachusetts General Hospital from 1869 to 1905 and was then on the hospital's Board of Consultation from 1905 until his death on November 3, 1927.

Like his grandfather, Dr. Warren's principal area of research and expertise was the surgical treatment of tumors. He published extensively on this subject, specializing in surgical treatments for breast cancer. He developed a particular model of dissection knife for use with tumors of the breast and had it produced by Codman and Shurtleff, the famous Boston firm of instrument makers.

For nearly a quarter of a century, he was the chairman of the Cancer Commission of Harvard University and was instrumental in raising funds for the construction of the Collis P. Huntingdon Memorial Hospital for Cancer Research. The Longwood campus remains Dr. Warren's most enduring memorial at Harvard Medical School, as he and Dr. Henry Pickering Bowditch together were the driving force for raising donations for the construction of the Quad facilities and encouraging local hospitals to remove to the new medical area.