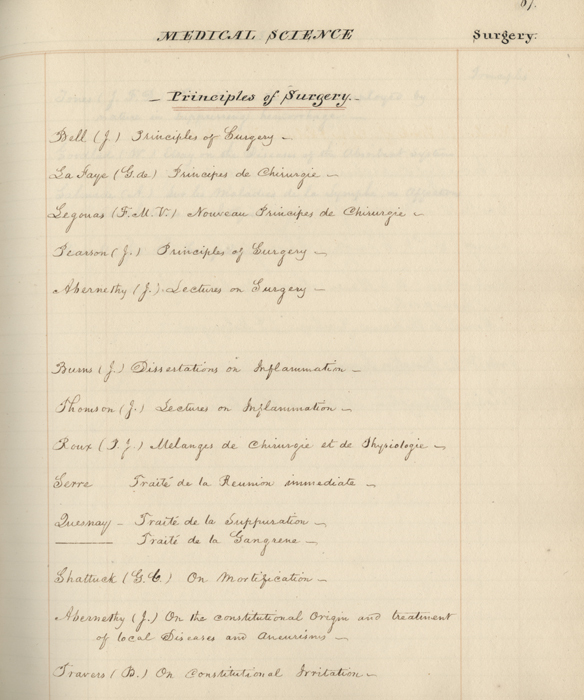 Ranging from the earliest days of printing up to the opening of the 20th century, the Warren Library contains some of the rarest and most significant works in the history of medicine and surgery, including titles by Andreas Vesalius, William Harvey, William Hunter, Joannes de Ketham, John Hunter, Ambroise Paré, and Celsus. Many of the oldest items in the collection were among the last to be added to it. There are ten incunables—books printed before 1501—in the collection. Most of these were purchased and added by Dr. John Warren just before his death in 1928. Book-collecting was Dr. Warren’s great personal pleasure, and he acquired many notable early anatomical works for the library.

Both a working anatomical and surgical library and a leisure-time resource, the Warren collection reflects the tastes, occupations, and preoccupations of its owners. A copy of John Morgan’s A Discourse upon the Institution of Medical Schools in America (1765) is inscribed by its author to Dr. John Warren in 1783—just as Dr. Warren was beginning to deliver the first lectures at Harvard Medical School. Dr. John Collins Warren assembled a significant collection of pamphlets related to the development and use of ether as an anesthetic—hardly surprising given his role as the surgeon in the groundbreaking first public operation at the Massachusetts General Hospital in 1846. Volumes of travel narratives, natural history, and exploration, such as Elisha Kent Kane’s The United States Grinnell Expedition in Search of Sir John Franklin (1854) are evidence of some of his personal areas of interest.

The published writings of the five Warrens themselves—from Dr. John Warren’s A View of the Mercurial Practice in Febrile Diseases (1813) to editions of his great-great-grandson’s textbook, An Outline of Practical Anatomy (1924)—are all represented in the collection as are several choice manuscript items, including John Warren’s handwritten notes for the earliest surviving lectures at Harvard Medical School.

A number of the Warren Library books bear presentation inscriptions from their authors to members of the family. A small handful even have a succession of family signatures on their title-pages or flyleaves, as the books passed from one generation to the next, over the course of a century and a half. Many of the volumes carry versions of the distinctive Warren bookplate with the family’s coat of arms depicting a rearing lion on a shield. This became the basis for the seal of Harvard Medical School. After their acquisition by Harvard, the books of the Warren Library each received an additional plate—this one with the names and dates of all five members of the family.

Dr. John Warren’s bequest of the Warren family’s library to Harvard Medical School makes a fitting memorial to the five generations of physicians and surgeons who have been tied so closely to the institution and its history.