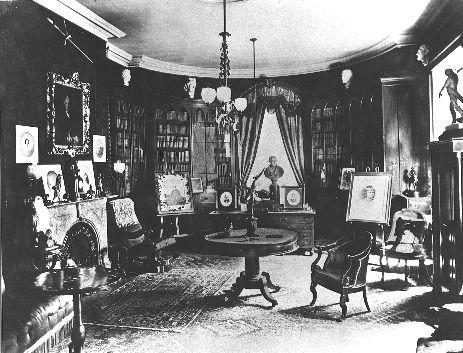 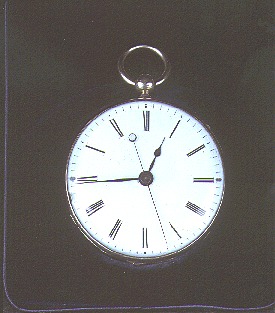 This Swiss gold repeating pocket watch was presented by Dr. Henry I. Bowditch to Dr. John Collins Warren "with gratitude and respect" upon his retirement from the faculty of Harvard Medical School on March 2, 1847. At Dr. Warren's death, the watch passed to his son, J. Sullivan Warren, and then, at Sullivan's death in 1867, to his nephew, James Dwight. 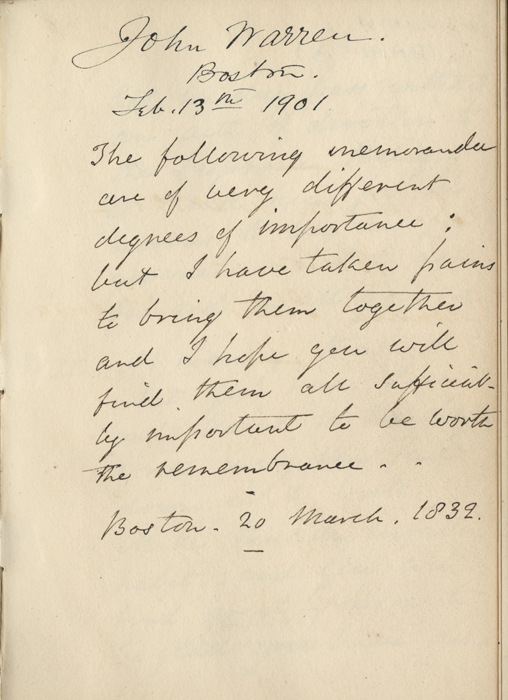 Before J. Mason Warren departed to pursue his medical studies in Europe, Dr. John Collins Warren composed for him a volume of miscellaneous advice, suggesting lectures to attend and eminent physicians to meet, and charging him with certain commissions, including the acquisition of new medical and surgical books and instruments and choice pathological specimens. He notes, in particular, "Observe the manner and mode of different lecturers. Whether they use notes or not and every circumstance that can improve my lectures. For example, whether they have any person to aid them in doing operations on the dead body before a class. How they manage dissecting room demonstrations. Making preparations, demonstrating difficult parts, as nerves and deep seated viscera. These things will become very common to you, but to me they will be very interesting." 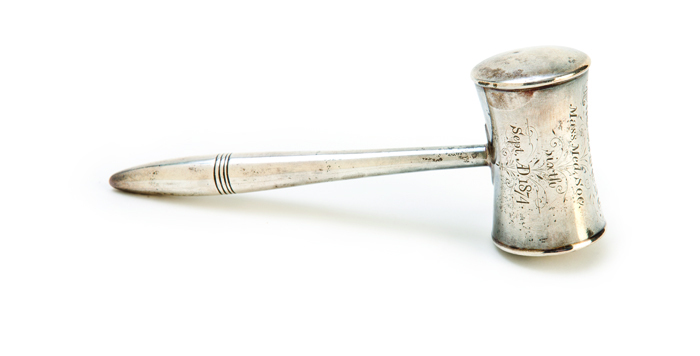 Designed to resemble a ceremonial gavel, this silver baby's rattle wasgiven to John Warren at his birth in 1874. Dr. Benjamin Eddy Cotting, a family friend, commissioned it from Crosby, Morse and Foss of Boston. Dr. Cotting was, at the time, president of the Massachusetts Medical Society. The engraving reads "B.E.C. to J.W., the present to the future president, Mass. Med. Soc., Sixth Sept. A.D. 1874." Although all five Warrens were members of the society, only John Warren (1753-1815) and John Collins Warren (1778-1856) held the office of president. 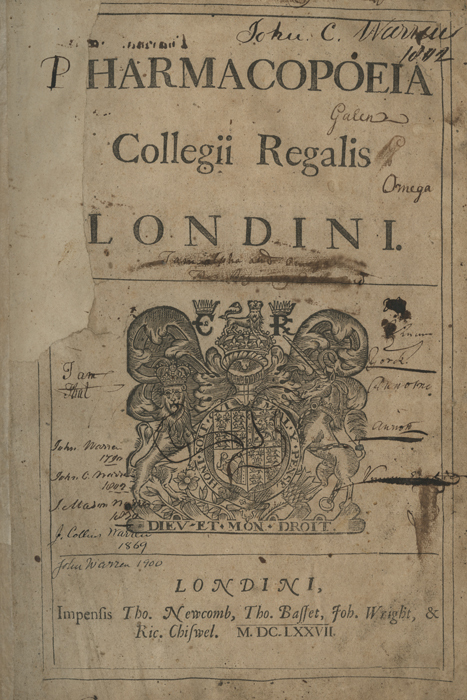 The Royal College of Physicians first began to publish an authoritative list of pharmaceutical compounds and directions for their use in 1618. The title-page of this third edition of the Pharmacopoeia is notable for the succession of signatures of its owners in the Warren family.

Before coming into the possession of John Warren, the volume belonged to Zabdiel Boylston (1679-1766), the physician who first inoculated the citizens of Boston against smallpox during the epidemic of 1721. Dr. Boylston signed his name at the end of the Pharmacopoeia, along with the Latin tag against book theft, “Hic nomen pono quia librum perdere nolo. Si quis furatur, per collum pendatur” [Here I place my name as I do not wish to lose my book. If anyone should steal it, let him hang by the neck.] 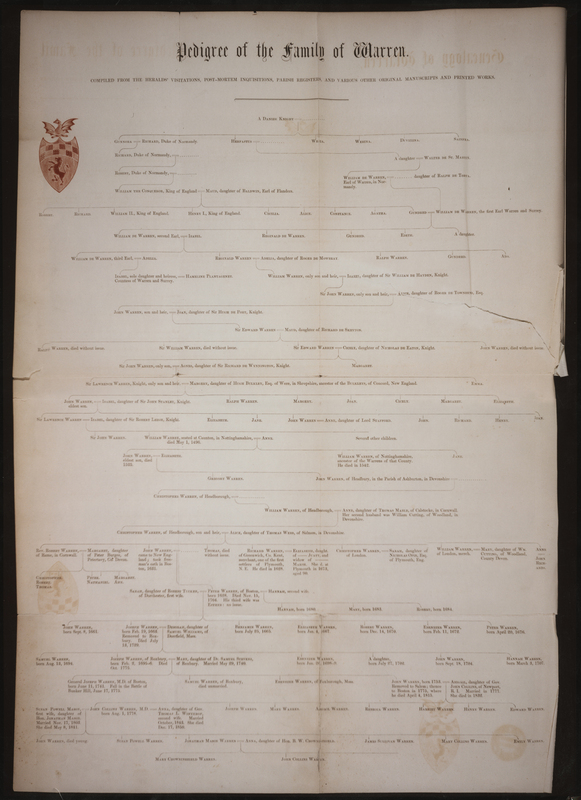 Pedigree of the Family of Warren, 1854

Shortly before his death, Dr. John Collins Warren (1778-1856) researched and published Genealogy of Warren with Some Historical Sketches (Boston : John Wilson and Son, 1854), tracing his family from its earliest origins down through the birth of his grandson, J. Collins Warren, in 1842. This family tree shows the lineage Dr. Warren claimed from the English Earls of Warren and, among others, William the Conqueror.