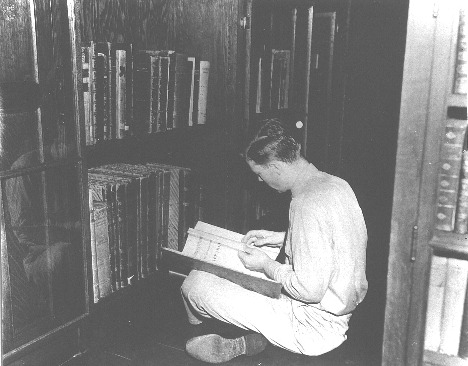 Five generations of physicians and educators in the Warren family assembled over 2,000 books, pamphlets, and manuscripts on medicine and surgical practice. At his death in 1928, Dr. John Warren bequeathed to the Harvard Medical Library this magnificent collection which forms the nucleus of the Warren Library. Originally shelved in cabinets in an alcove on the second floor of Gordon Hall, beneath the Warren Anatomical Museum, the Warren Library is now one of the special collections housed at the Countway Library of Medicine.

Dr. John Collins Warren began to assemble a personal library during his trip to Europe in 1799, and he added the medical books of his father to it after John Warren’s death in 1815. By 1855, when the following description appeared in Luther Farnham’s survey of notable private libraries, the Warren collection had grown to some 6,000 volumes: “The books are arranged by subjects, in small cases, as follows: Anatomy, surgery, medicine, natural history, theology, history, general science, classical literature, and miscellany. It will thus be seen to be a professional library; just such an one as an eminent physician and surgeon should possess. Several complete sets of medical journals, home and foreign, Cuvier complete, and De Blainville, look particularly inviting. The proprietor has spared no pains in securing the best books for his purposes, and in the best editions.”