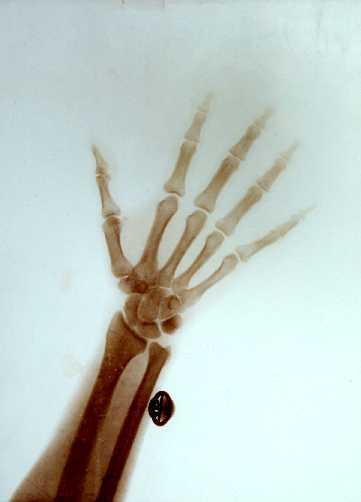 X-ray of the Hand and Wrist of Nicholas II, Emperor of Russia : radiographic prints, 1898

These two photographic prints are not only specimens of some of the earliest X-ray images but also particularly notable for their subjects and the clarity of the bones, cufflink, and jewelry of the imperial couple. While the diagnostic value of W. C. Röntgen’s discovery a few years earlier was immediately apparent to physicians, this technology was also enjoyed by the public—and even royalty—for its novelty.

The donor of these two photographs received them from the wife of Dr. H. H. Horne in Lapland after the 1917 Russian Revolution. At the Czar’s request, Dr. Horne brought his X-ray apparatus to the palace at St. Petersburg in the winter of 1898. During the photographic session, according to Mrs. Horne, the equipment overloaded the palace’s electrical system, and she inadvertently bumped into the Czar in the darkness.

X-ray of the Hand and Wrist of Alexandra, Empress of Russia : radiographic prints, 1898