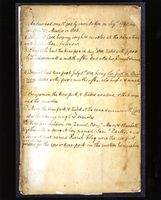 The flyleaves and end papers of Bibles were often used to record the births, deaths, and marriages of family members. But this Bible, belonging to the Waterhouse family, was used to record the first vaccinations against smallpox in the United States. Dr. Benjamin Waterhouse inoculated his children, Daniel, Benjamin, Mary, and Elizabeth, and two servants, Samuel Carter and Kesiah Flag, with cowpox matter during the summer of 1800, following the discovery by Edward Jenner in England. According to Waterhouse, all were exposed to smallpox after the vaccinations and also seven years later and suffered no ill effects "which was done to convince the faithless, and silence the mischievous." 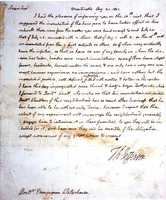 After successfully vaccinating his children against smallpox, Dr. Benjamin Waterhouse sent a copy of his pamphlet A Prospect of Exterminating the Small-Pox (1800) to Thomas Jefferson, then Vice-President of the United States. Jefferson was keenly interested in Waterhouse’s work, responding that "Every friend of humanity must look with pleasure on this discovery, by which one more evil is withdrawn from the condition of man…. In this line of proceeding you deserve well of your country." Benjamin Waterhouse and Thomas Jefferson then corresponded on the subject for a number of months.

As this letter from 1801 testifies, some vaccine matter from Waterhouse was used by Jefferson in experiments with members of his family and household at Monticello. Thomas Jefferson then promoted the use of smallpox vaccination in other cities of Virginia, gave some of his vaccine to Dr. John Redman Coxe to begin work in Philadelphia, and even sent some sample matter with explorers Lewis and Clark to encourage the spread of vaccination throughout the country. 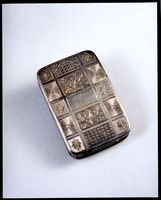 This silver snuffbox was a gift from English physician Edward Jenner (1749-1823) to Benjamin Waterhouse of Cambridge. In 1796, Jenner discovered that cowpox vaccine could be introduced into the human body to produce immunity to smallpox. Benjamin Waterhouse (1754-1846) played a major role in the introduction of Jenner’s work into this country by performing the first smallpox vaccinations on his children during the summer of 1800. The two became correspondents and friends.

In a letter dated November 16, 1802, Waterhouse said, "Dr. Jenner has been to me what the sun is to the moon…. Dr. Jenner has just sent me a present I highly prize, a silver box inlaid with gold of exquisite taste and workmanship, bearing the inscription, ‘Edward Jenner to Benjamin Waterhouse.’ But Mr. John Ring annexed the superscription in rather a hyperbolic style, ‘From the Jenner of the Old World to the Jenner of the New World.’"