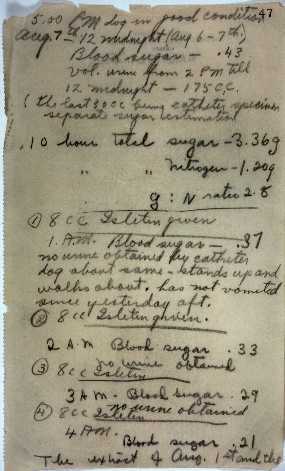 During the summer of 1921, hoping to bring relief to patients afflicted with diabetes mellitus, Canadian surgeon Frederick Banting and his research assistant, Charles Best, began to experiment with ligating the pancreatic ducts of dogs to isolate a hypothetical internal secretion which allows the body to metabolize carbohydrates and regulate the level of sugar in the blood. In the autumn of that year, Banting and Best managed to keep a diabetic dog, Marjorie, alive for seventy days with their pancreatic extract. By 1923, Eli Lilly and Company began commercial production of a purified version of the extract—called "Insulin" from the Latin word insula for "island" since the extract was produced in the pancreatic islets of Langerhans—allowing patients a viable therapy to keep diabetes under control for the first time.

This leaf from the joint notebook kept by Banting and Best during 1921 chronicles a key experiment on Dog No. 408, showing the drop in the level of blood sugar after the hourly administration of Isletin, the original working name for the extract, coined by the scientists a few days earlier.