The Operation on Alice Mohan 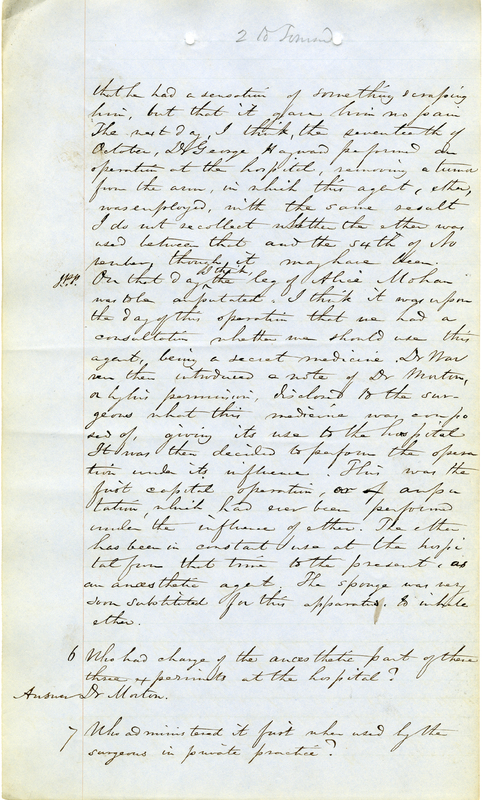 At the request of W. T. G. Morton, “to be preserved in perpetual remembrance of the thing,” sixteen physicians--John Collins Warren and Henry Jacob Bigelow among them--with knowledge of the circumstances surrounding the ether discovery and its first surgical uses submitted depositions to the Suffolk County Justices of the Peace in 1852 and 1853.

In the deposition displayed here, S. D. Townsend, a witness to the initial demonstration on October 16, describes the first capital operation performed on November 7 and discusses substitution of a sponge for the inhaler.

On November 6, Morton approached George Hayward to employ his compound in a hospital amputation.  John Collins Warren then received a letter from Morton indicating the substance was sulphuric ether, and on that understanding he approved the use of the anesthetic for the procedure.  Hayward’s amputation of a lower leg of Alice Mohan was, on November 7, the first capital operation using ether anesthesia, and, in the assessment of Richard M. Hodges, is “therefore justly regarded as the first decisive operation performed under its influence…. This was the actual demonstration which from its magnitude was calculated to carry to the scientific world the conviction—first, of the certainty of ether; second, of its safety; and third, of the completeness of the insensibility which it produced.”

On December 14, W.T.G. Morton then ceded to Massachusetts General Hospital the right "to use the discovery above mentioned for the benefit of indigent patients, the sick and suffering poor, and other persons at the institution."

← A Patent for Ether
George Hayward →
The Operation on Alice Mohan