Long's Use of Sulphuric Ether 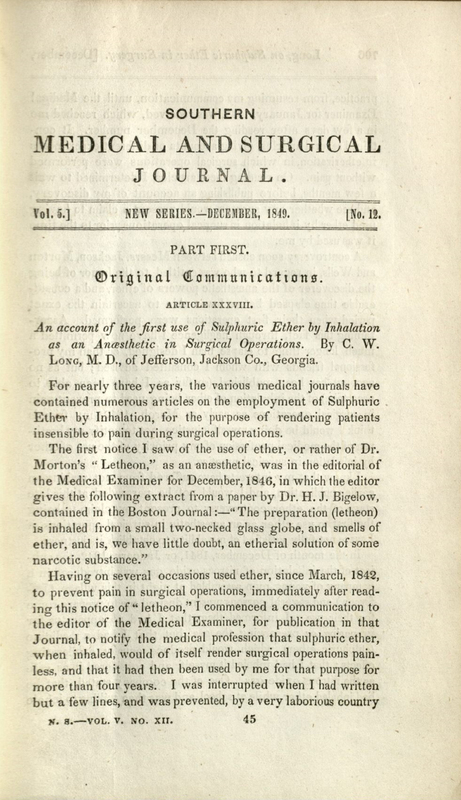 Crawford Williamson Long (1815-1878)
"An Account of the First Use of Sulphuric Ether by Inhalation as an Anaesthetic
in Surgical Operations," from the Southern Medical and Surgical Journal,
New Series, Volume 5, Number 12, December 1849
(Augusta, Georgia : James McCafferty, 1849)
From the Collections of the Boston Medical Library

In this "plain, unvarnished" account, Long first announces his use of ether as an anesthetic during surgery to remove tumors on the neck of James M. Venable on March 30 and June 6, 1842--some four years before the Gilbert Abbott operation.

Responding to criticism that he failed to promote such a discovery immediately, Long stated:

Had I been engaged in the practice of my profession in a city, where surgical operations are performed daily, the discovery would, no doubt, have been confided to others, who would have assisted in the experiments; but occupying a different position, I acted differently, whether justifiable or not. The result of my second experiment in etherization, was such as led me to believe that the anaesthetic state was of such short duration that ether would only be applicable in cases in which its effects could be kept up, by constant inhalation, during the time of the performance of the operations. Under this impression, up to January, 1847, I had not used ether, in but one case, in extracting teeth, and thus deprived myself of experimenting in the only class of cases which are of frequent occurrence in a country practice…. I leave it with an enlightened medical profession, to say, whether or not my claim to the discovery of etherization is forfeited, by not being presented earlier, and with the decision which may be made, I shall be content.

Long continued to practice in Georgia, serving in the Confederate Army during the Civil War.  He received support for his claim to the ether discovery from the Georgia Medical Society in 1852 and found late support for his claim to priority from Dr. J. Marion Sims in the 1870s, shortly before his death on June 17, 1878.  Long’s three daughters promoted his legacy, and memorials, statues, and plaques recognizing his contribution appeared through the early 20th century, and there is a Crawford W. Long Museum devoted to his life and work in Jefferson, Georgia.