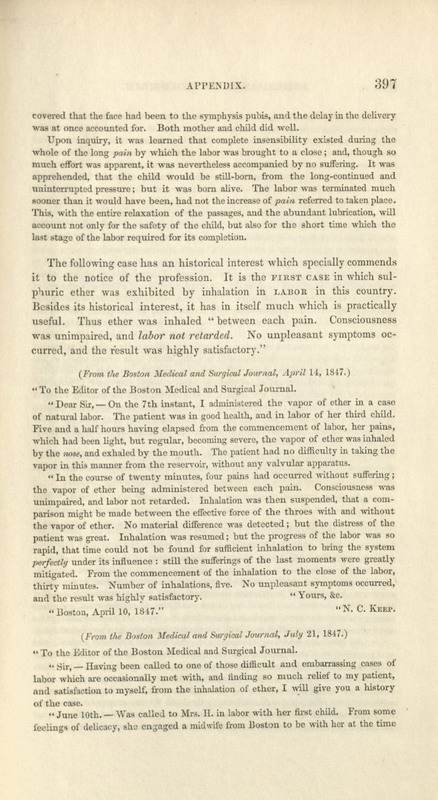 Walter Channing (1786-1876)
A Treatise on Etherization in Childbirth :
Illustrated by Five Hundred and Eighty-One Cases
(Boston, W.D. Ticknor and Company, 1848)
Gift of James T. Bradlee to the Boston Medical Library, 1907

Some other milestones in anesthesia quickly followed, with Jonathan Mason Warren’s December 15 operation on Thomas Poynton Ives—the first use of anesthesia on a child—then Nathan Cooley Keep’s administration of sulphuric ether during natural labor and Walter Channing’s use during instrumental labor in the following spring.

Walter Channing began to employ ether anesthesia in cases of childbirth as early as May 1847.  He published accounts of his first cases in the Boston Medical and Surgical Journal and then in pamphlet form.  Channing compiled this text, based on his own cases and those of other physicians, as part of his research into the safety and efficacy of ether anesthesia in labor.

In his preface, Channing states

My great, I had almost said my sole, object in this circular … was to ascertain here at home, in the birthplace of etherization, what had been the precise results of many experiments, made by many physicians, of the employment of the remedy of pain.  My object was to learn if this use of it had been safe—safe both to mother and child; and thus, as far as such results might reach, to contribute something towards settling the most important point concerning its further use, namely, that of its safety.

The passage displayed reproduces a letter from Nathan Cooley Keep (1800-1875), recounting the first use of ether anesthesia in natural labor; the patient was Henry Wadsworth Longfellow’s wife, Fanny, who gave birth to a daughter on April 7, 1847.  Longfellow's diary entry records, “Fanny heroically inhaled the vapor of sulphuric ether, the great nepenthe, and all the pain of labor ceased, though the labor itself went on and seemed accelerated.  This is the first trial of ether at such time in this country.  It has been completely successful.  While under the influence of the vapor, there was no loss of consciousness, but no pain.  All ended happily.”