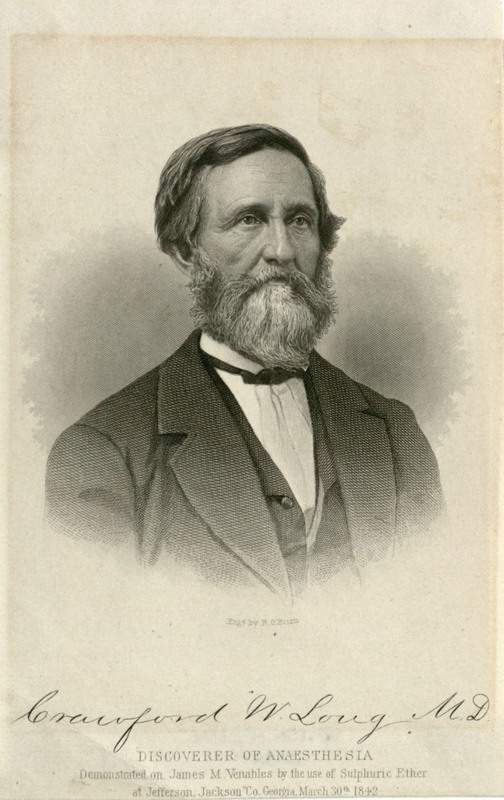 Soon after the debate over credit for the discovery of anesthesia began to rage between Morton, Jackson, and the Wells family, a fourth claimant appeared—Crawford Williamson Long (1815-1878), a country practitioner from Jefferson, Georgia, who had studied medicine at Transylvania and the University of Pennsylvania.

According to his account, Long had been familiar with the intoxicating effects of nitrous oxide and sulphuric ether and noted bruises and falls which caused no pain when under the influence of those gases. Long then administered ether on a towel to James M. Venable in a surgical procedure to remove a small tumor on the neck on March 30, 1842; a subsequent operation on Venable was performed on June 6. Long performed a third surgical operation, an amputation of a toe, using ether on July 3, 1842. He continued to experiment with ether anesthesia, possibly even administering it to his wife in labor on December 27, 1845.

Crawford W. Long read of W. T. G. Morton’s demonstrations in December 1846 and early 1847, but delayed in announcing his own experiments “in order to learn whether any surgeon would present a claim to having used ether in surgical operations prior to the time it was used by me…. My friends think I would be doing myself an injustice not to notify my brethren of the medical profession of my priority in the use of ether by inhalation in surgical operations.” Long delayed in publicizing his experiences due to the few opportunities he had had to employ ether anesthesia in his practice and a belief that, following the second Venable operation, the anesthetic state would not last long enough to be used in capital procedures.

← The Death of Horace Wells
Long's Use of Sulphuric Ether →
Or Crawford W. Long?