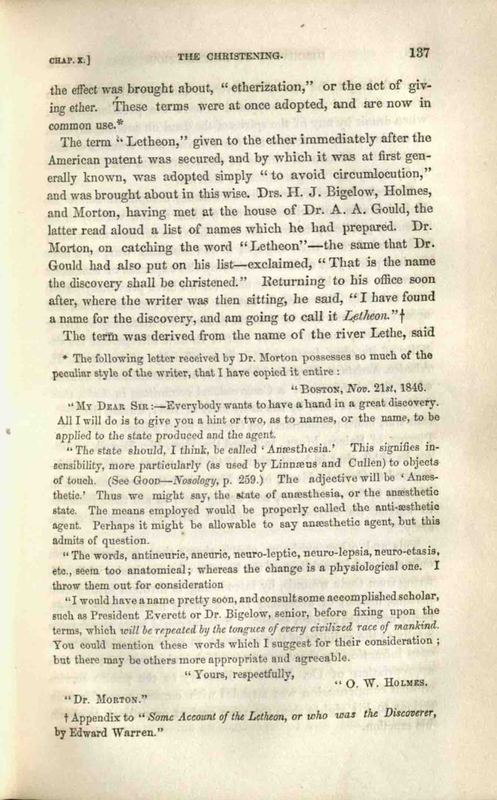 Nathan Payson Rice (1829-1900)
Trials of a Public Benefactor, as IIlustrated in the Discovery of Etherization
(New-York : Pudney & Russell, 1859)
Gift of Dr. Oliver Wendell Holmes to the Medical Library, 1889

This was Holmes’ own copy and contains a presentation inscription to him from W. T. G. Morton.

Commissioned by W. T. G. Morton, Trials of a Public Benefactor attempts to provide support for his claim to precedence in the discovery of ether anesthesia.  Here Oliver Wendell Holmes coins the term in a letter to Morton written on November 21, 1846, shortly after the first public demonstrations at Massachusetts General Hospital.  Holmes wrote:

Everybody wants to have a hand in a great discovery.  All I will do is to give you a hint or two, as to names, or the name, to be applied to the state produced and the agent.  The state should, I think, be called ‘Anæsthesia.’  This signifies insensibility, more particularly (as used by Linnæus and Cullen) to objects of touch…. The adjective will be ‘Anæsthetic.’  Thus we might say, the state of anæsthesia, or the anæsthetic state…. I would have a name pretty soon, and consult some accomplished scholar, such as President Everett or Dr. Bigelow, senior, before fixing upon the terms, which will be repeated by the tongues of every civilized race of mankind.

Trials of a Public Benefactor is also the source for the (probably apocryphal) quotation attributed to John Collins Warren at the Gilbert Abbott operation stating that “Gentlemen! This is no humbug.”