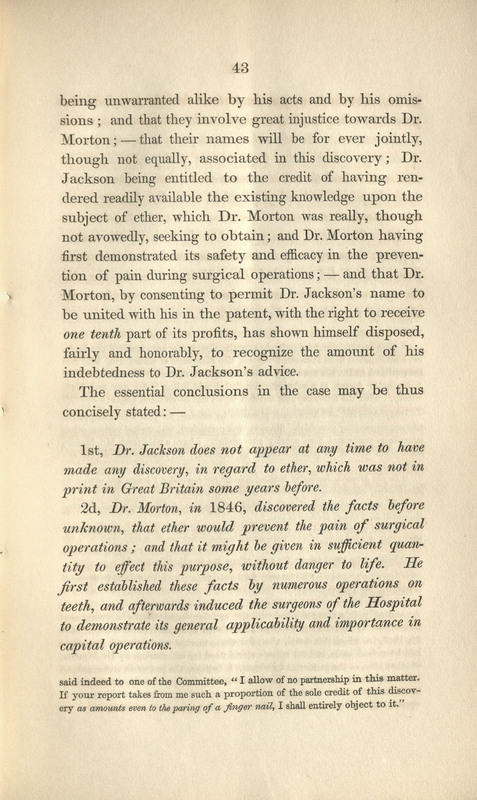 Report of the Board of Trustees of the Massachusetts General Hospital, Presented to the Corporation at their Annual Meeting, January 26, 1848
(Boston : Printed by John Wilson, 1848)
Transferred from the Harvard College Library to the Library of Harvard Medical School, 1938

The bulk of this edition of the hospital’s annual report is devoted “with just pride” to the ether discovery but also analyzes the subsequent debate over who could justly claim credit for the development. While the investigations of Horace Wells are discounted—“his labors and experiments may, we think, fairly be considered as having some indirect influence, though not themselves attended with direct success”—the report attempts to balance the conflicting claims of Charles T. Jackson and W. T. G. Morton, and summarizes the situation:

It seems clear, that to Dr. Morton the world is indebted for this discovery; and that, but for Dr. Jackson’s scientific knowledge and sound advice, Dr. Morton would not have made it at that precise time, and might have failed to do so at any time. The one, having a strong conviction of the safety of the agent, has the credit of giving the best possible advice: the other, by nature determined and fearless, makes the first actual application. Between the discoverer and his adviser, there will henceforth ever be an indissoluble, however reluctant, copartnership.

Despite this somewhat balanced assessment, the report draws four conclusions, generally awarding Morton with credit for the discovery.  This would be one of the first arguments put forward in the so-called ether controversy, attempting to determine who should be considered responsible for the discovery of surgical anesthesia--a conflict which went on for many years, setting Morton and Jackson at odds and drawing in additional claims from Crawford W. Long and the family of Horace Wells.

← Anesthesia in England
The Morton Testimonial Association →
Morton or Jackson?