The Introduction of Surgical Anesthesia

In his introductory lecture opening the winter term on November 3, 1847, the new dean of the Harvard Medical School, Oliver Wendell Holmes, touched on the formation of the American Medical Association, the proliferation of medical schools, and Boston’s place in the history of medicine.  He then alluded to the most revolutionary of recent events:

In this very hour while I am speaking how many human creatures are cheated of pangs which seemed inevitable as the common doom of mortality, and lulled by the strange magic of the enchanted goblet, held for a moment to their lips, into a repose which has something of exstacy in its dreamy slumbers.  The knife is searching for disease, the pulleys are dragging back dislocated limbs, nature herself is working out the primal curse which doomed the tenderest of her creatures to the sharpest of her trials, but the fierce extremity of suffering has been steeped in the waters of forgetfulness, and the deepest furrow in the knotted brow of agony has been smoothed forever.

Just one year earlier, at Massachusetts General Hospital, the first public demonstration of a surgical operation employing ether anesthesia changed medicine, surgery, and patient care in a sudden and fundamental way.  Strange Magic of the Enchanted Goblet draws on the rich holdings of both the Boston Medical Library and Harvard Medical School to examine this critical event in medical history—along with its rival claimants and controversies—and outline the tangled story of the introduction of surgical anesthesia. 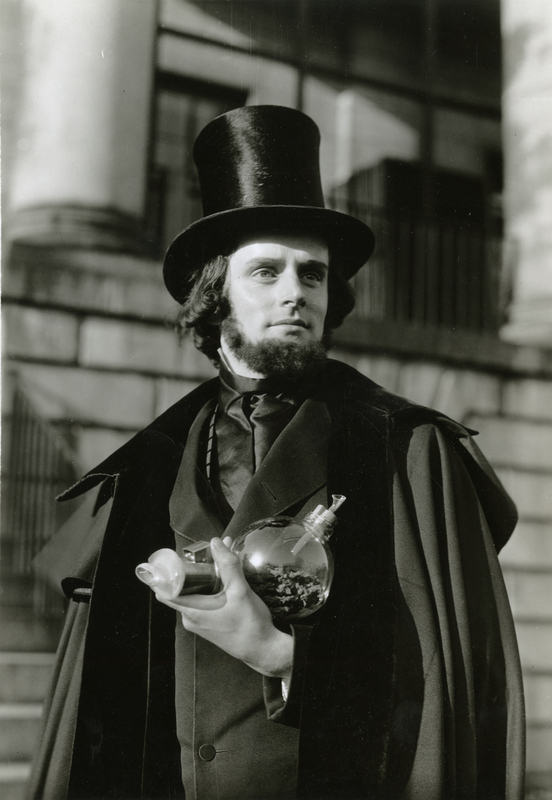 Photographs from “The Advent of Anesthesia,” 1933
Gift of Frederick P. Churchill to the Library of Harvard Medical School, 1973

In 1933, the Mallinckrodt Chemical Company produced a short silent film, “The Advent of Anesthesia”, depicting W. T. G. Morton's experiments with sulphuric ether and recreating the first public demonstration of the 1846 operation on Gilbert Abbott.  The film used the Ether Dome and other facilities at Massachusetts General Hospital and the cast included hospital staff and personnel, including John Peabody Monks as Morton, Somers Hayes Sturgis as Gilbert Abbott, and Edward D. Churchill as surgeon John Collins Warren.

Edward D. Churchill preserved a file of still photographs of the actors.  Shown here are Dr. Monks, holding a replica of the inhaler, and a depiction of the first administration of ether.

“The Advent of Anesthesia” was first shown in the Ether Dome itself on May 31-June 2, 1933.  Of the film, Dr. Churchill noted that “the widespread interest in the film was evidenced by a brisk demand for tickets that made it necessary to give four or five performances on three successive days.… The Ether Dome was restored as far as possible to its appearance in 1846…. Painstaking efforts were made to establish the exact events and personages concerned in the discovery so that the film may be accredited with historical accuracy.”

Effects of Sulphuric Ether →
The Introduction of Surgical Anesthesia