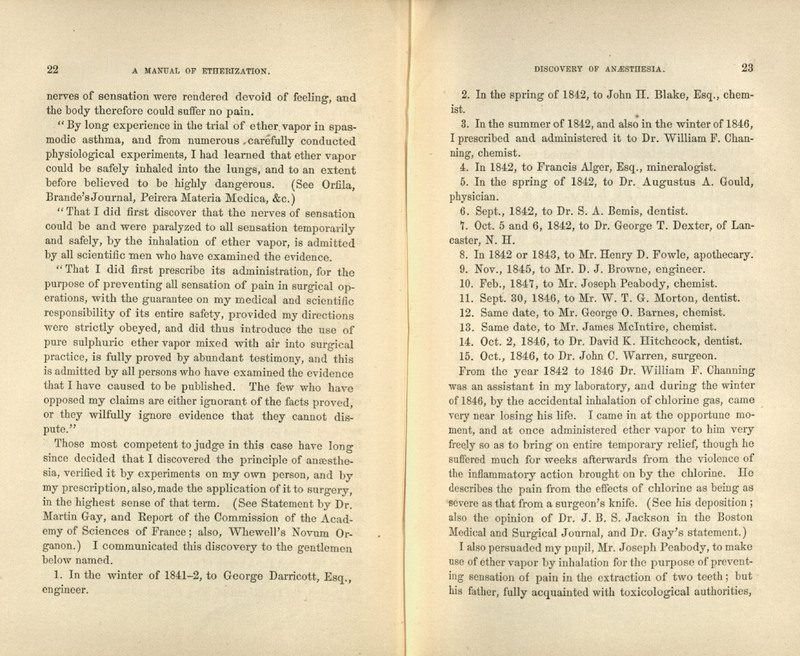 Charles Thomas Jackson (1805-1880)
A Manual of Etherization : Containing Directions for the Employment of Ether,
Chloroform, and Other Anaesthetic Agents by Inhalation, in Surgical Operations …
(Boston : Published for the Author by J. B. Mansfield, 1861)
From the Collections of the Boston Medical Library

This copy was presented by Jackson to Walter Channing, the author of A Treatise of Etherization in Childbirth (1848).

Jackson issued this publication “to interest both the Surgeon and the Soldier, and with the intention of aiding the one and of informing the other” at the outbreak of the Civil War.  The Manual provides illustrations and examples of cases from French medical literature, but  also supports Jackson’s claim to the discovery of anesthesia:

Those most competent to judge in this case have long since decided that I discovered the principle of anaesthesia, verified it by experiments on my own person, and by my prescription, also, made the application of it to surgery, in the highest sense of that term.

The passage displayed here lists Jackson’s history with anesthesia starting in the winter of 1841-1842.

Both Morton and Jackson laid claim to the discovery of ether anesthesia, the latter receiving initial strong support in Europe, while Morton had the backing of Massachusetts General Hospital.  Years of legal wrangling ensued, without any clear resolution.

Charles Thomas Jackson eventually suffered a mental breakdown, or possibly a stroke, and was admitted to the McLean Asylum in 1873.  He died there on August 28, 1880.

While generally remembered for his prominent role in the introduction of ether anesthesia, William Thomas Green Morton was never able to derive financial benefit from the discovery nor could he enforce his patent.  He abandoned dentistry for farming and became impoverished from years of ether-related litigation.  Morton died of apoplexy on July 15, 1868.

← The Morton Testimonial Association
"I did not feel so much as the prick of a pin" →
Jackson or Morton?