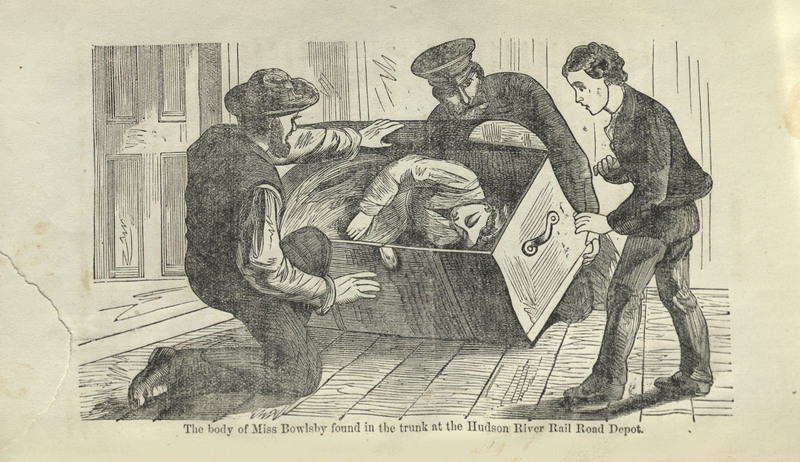 "The Body of Miss Bowlsby Found in the Trunk at the Hudson River Rail Road Depot" from The Trunk Tragedy: or, the Late Mysterious Murder in New York of the Young and Lovely Miss Alice A. Bowlsby, of Patterson, N.J., in the Vile Den of a New York Abortionist ... the Only Reliable Account Published
(Philadelphia, C.W. Alexander, [1871?])

Purchased for the Boston Medical Library through the Frederick Winsor Fund, 1917.

On August 26, 1871, the decomposed body of a young woman was found in a trunk at a railroad depot in New York. She was later identified as Alice Augusta Bowlsby who had been abandoned by her lover who had committed suicide; Alice Bowlsby had died of metroperitonitis following an abortion.  The trunk was later traced to a Jacob Rosenzweig, also known as Doctor Ascher, who practiced in the city.  The Trunk Tragedy gives a sensational account of the hunt for Rosenzweig, the identification of the body, and the coroner's interviews with witnesses in the case.

The account ends with, "The effort to make out that Miss Bowlsby was not a good girl is in our opinion the most contemptible feature of the whole awful tragedy.  She erred in giving way to the tempter, and God knows she paid dearly for her error.  The very fact that she sought, by such desperate means, to hide all from the world, shows her to have been the victim of circumstances rather than a deliberate sinner."

Rosenzweig was found guilty of manslaughter and sentenced to seven years' hard labor. 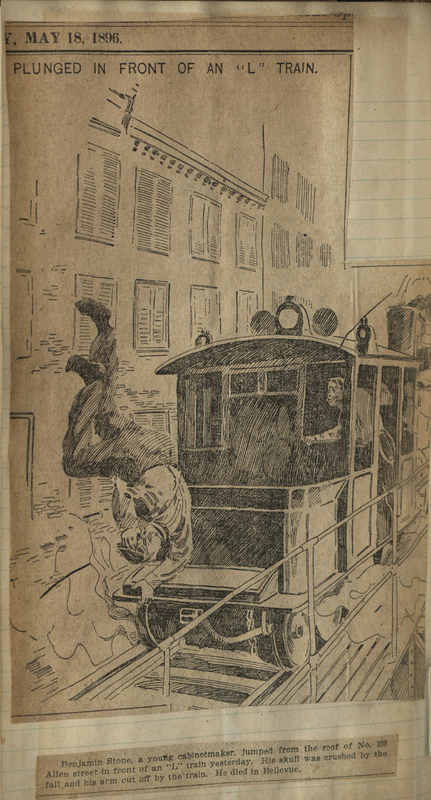 As this newspaper article reports, nineteen year old Benjamin Stone of New York, afflicted with headaches, threw himself in front of a train and committed suicide.  The article is part of a five-volume collection of newspaper accounts of several hundred cases of suicide from 1892 to 1896.